At last, Brexit is nearing the end of the tunnel as the U.K parliament “voted overwhelmingly in favor of Prime Minister Boris Johnson’s Brexit deal, finally paving the way for the United Kingdom to leave the European Union later this month after more than four decades of membership.” according to CNN today. In terms of market impact, it was rather minimal with GBP/USD hovering above 1.30 as the result was already widely expected. Not to mention the British pound (FXB) had already rallied a ferocious 9% off its lows last year: 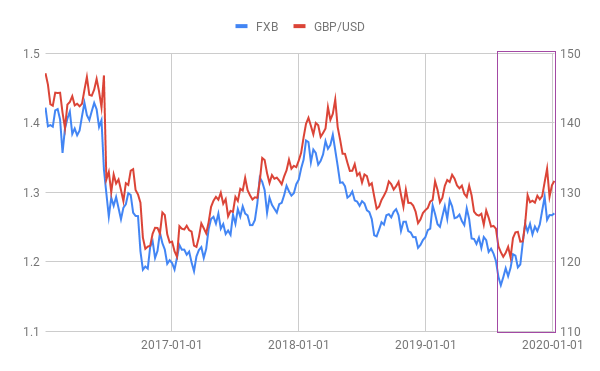 A massive short squeeze by large speculators in British pound futures has largely fueled the remarkable recovery, as their net short positioning shrank all the way from 100,000 contracts to actually turn bullish for the first time since late 2017. 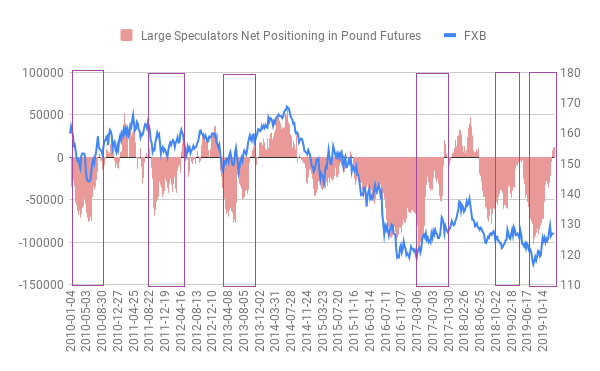 Indeed, there has been a handful of short covering rallies in the past decade in the FXB as shown above. Going forward, the big question is whether large speculators will continue piling on long positions to propel the pound higher like in 2014, or whether it will be a contrarian sell signal like in 2018’s top. We believe the latter scenario is more likely due to disappointing economic data and persistently negative yield differential between U.K and U.S.

Based on the latest readings released by Markit this month, while the services PMI was able to crawl its way back to the breakeven level of 50, the construction and manufacturing PMI remain deep in contractionary territories. In fact, construction PMI has been persistently under the 2016 lows since July last year: 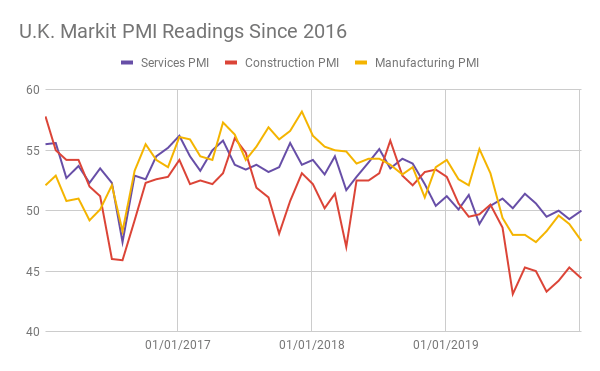 The weakening indicators in all facets of the U.K. economy will certainly be an obstacle for any further gains in the pound. Unless the PMI across the board can stage a recovery similar to 2013 or 2016, we would expect GBP/USD to remain glued near the lows. 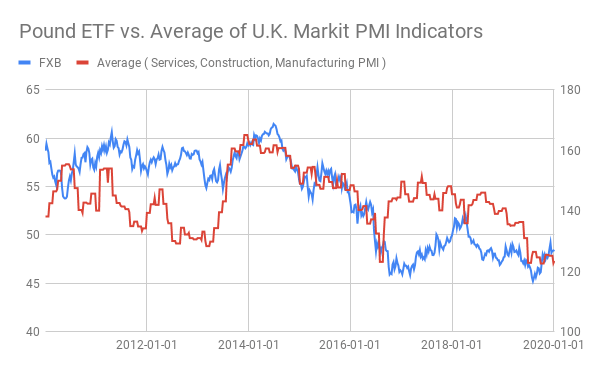 Indeed, softening economic outlook has prompted Bank of England’s Mark Carney to reiterate more monetary easing policies will most likely be necessary. To quote from part of his speech:

Economic growth in UK has slowed below potential.There is sufficient headroom to at least double the August 2016 package of 60 billion pounds of asset purchases, a number that will increase with further Gilt issuance. BOE has equivalent of 250 basis points of policy space – QE, forward guidance, rate cuts all parts of tools.

GBP/USD dipped further on those remarks and will likely continue its downtrend on expectations of interest rate cuts absent a pick-up in economic activity. The increasing divergence between the U.K. and U.S. economy also meant that the long-term bond yield differential between the two countries remains deeply negative: 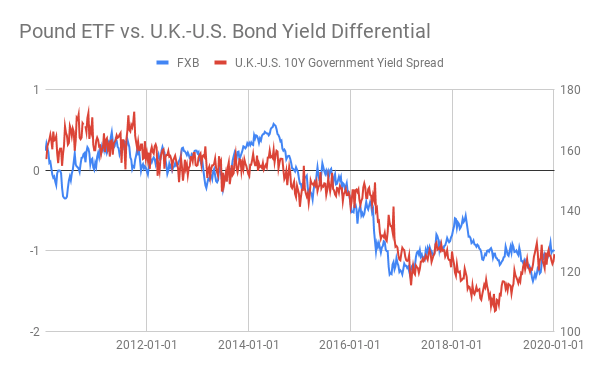 As illustrated, the pound has been on a persistent long-term downtrend along with the U.K.-U.S. 10-year bond yield spread, which has actually been recovering for the past year. Though, with U.S. non-manufacturing ISM strengthening and beating expectations, widening divergence between the two economies’ services sector would most likely lead to more near-term weakness in GBP/USD and FXB. 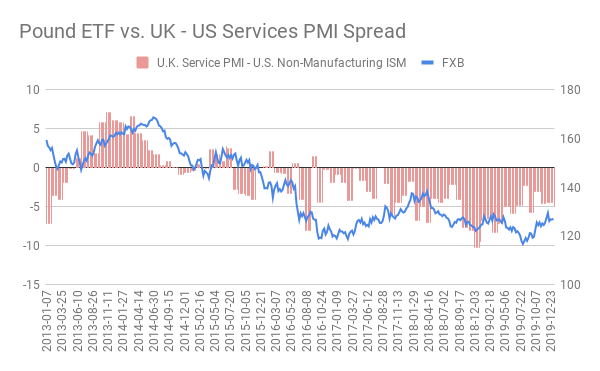 To conclude, even though the Brexit uncertainty may be out of the way, with the massive short covering rally having run its course, the pound is prone to further downside on negative economic data and potentially more monetary easing policies ahead. Although we anticipate long-term bottoms are in, FXB and U.K. ETF (EWU) will likely whipsaw back towards recent lows in the short-term.

‘No development effort is to be effective if it damages environment’

This sheep stuck in a tire.