More than Ã‚Â£8million raised in one day: Generous Britons dig deep after cyclone devastates Mozambique where death toll could pass 1,000

By Sam Greenhill for the Daily Mail

Generous Britons raised an astonishing Ã‚Â£8 million on the first day of the Cyclone Idai appeal Ã¢â‚¬â€œ but more is needed to prevent a humanitarian disaster, charities say.

Half a million people are at dire risk of disease as receding floodwaters reveal the horrors of bodies and ruined homes.

A week after Cyclone Idai smashed into the coast of Mozambique, UK aid is beginning to reach stricken families who have lost everything. The British public has responded magnificently to the appeal launched on Thursday by the Disasters Emergency Committee (DEC), an umbrella group of 14 aid agencies. 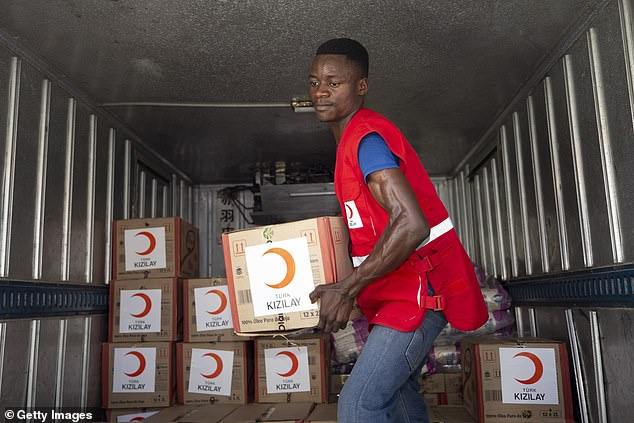 So far the UK has sent 7,500 shelter kits and 100 family tents to Mozambique. Tomorrow, a plane carrying forklift trucks and other equipment will fly to the region

They put in Ã‚Â£6 million and the Government matched pound-for-pound the first Ã‚Â£2 million Ã¢â‚¬â€œ taking the first-day total to Ã‚Â£8 million. The Queen and Prince Charles were among those to give money.

Now the Treasury has agreed to match a further Ã‚Â£2 million, meaning the next donors to pledge cash will see their contributions doubled. So far the UK has sent 7,500 shelter kits and 100 family tents to Mozambique. Tomorrow, a plane carrying forklift trucks and other equipment will fly to the region.

It is feared thousands may have perished when the 105mph tropical storm lashed Mozambique, Malawi and Zimbabwe, sweeping floodwaters 30 miles inland and turning homes, villages and farmland into squalid lakes.

Some 2.6 million survivors urgently need help. They include 3,000 found sheltering on the roof of a school that has just six toilets. 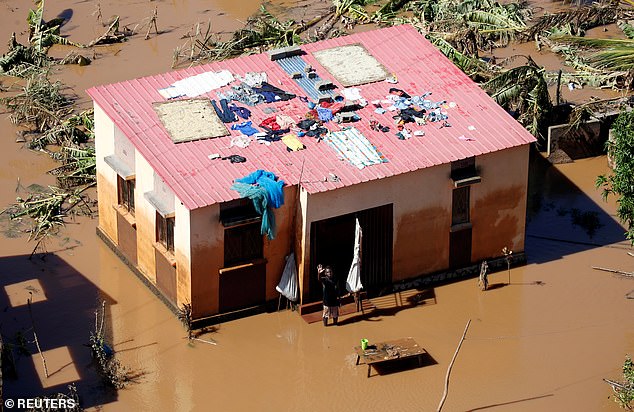 A week after Cyclone Idai smashed into the coast of Mozambique, UK aid is beginning to reach stricken families who have lost everything

DEC chief executive Saleh Saeed said: Ã¢â‚¬ËœWe are extremely grateful for the huge generosity of everyone in the UK who has donated.

Ã¢â‚¬ËœThe situation across Mozambique, Malawi and Zimbabwe remains desperate, with thousands still to be brought to safety, and many more in need of food, medical attention, clean water and shelter. Every hour counts in the race to save lives.Ã¢â‚¬â„¢

International Development Secretary Penny Mordaunt said: Ã¢â‚¬ËœWe are only just beginning to see the true impact of this devastating cyclone. UK aid is now in the region worst hit by the cyclone.

Ã¢â‚¬ËœIt is right that the UK, the biggest global donor and one of the first to respond to the crisis, does all it can to provide life-saving assistance to those desperately in need.Ã¢â‚¬â„¢

There are thought to be 15,000 stranded people Ã¢â‚¬Ëœin bad shapeÃ¢â‚¬â„¢, many of them on rooftops or stuck in trees, Mozambican minister Celso Correia said.

The UN has warned that Cyclone Idai could prove to be the worst weather-related disaster ever to strike the Southern Hemisphere.

Humanitarian agencies are desperately worried about the spread of malaria and cholera.

Ã¢â‚¬ËœWe are running out of time, it is at a critical point here,Ã¢â‚¬â„¢ Unicef chief Henrietta Fore said.

Ã¢â‚¬ËœThereÃ¢â‚¬â„¢s stagnant water, decomposing bodies, and lack of good hygiene and sanitation. We are worried about cholera, about malaria, because of the stagnant water.Ã¢â‚¬â„¢Ã‚Â