Price action for the British Pound to Czech Koruna exchange rate saw volatility pick up substantially last week with the cross sliding from a 21-month best above 30.2 before spiking sharply on Friday to post the largest intra-day gains for the pair in over two years. At the time of writing, GBP/CZK was last seen trading at 30.114, down ever-so-slightly from the weekly open but remaining in the vicinity of the recent multi-year best.

While the Pound Sterling remains Brexit-coupled with developments therein prompting considerable fluctuations in market pricing for the GBP, the CZK has been facing it’s own risk factors as concerns over the health of the global economy subdue the outlook for both businesses and consumers. The latest consumer confidence figures for the Eastern European nation indicated that consumer sentiment had fallen to it’s lowest level since mid-2017 (when the cross was last seen at comparable levels), with households growing more concerned about their future financial situations. Recent releases had shown that while consumers had grown increasingly worried about slowing economic activity overall, they had remained upbeat on their personal fiscal situation. However, the latest release suggested that consumer assessments of their own situation had turned pessimistic. 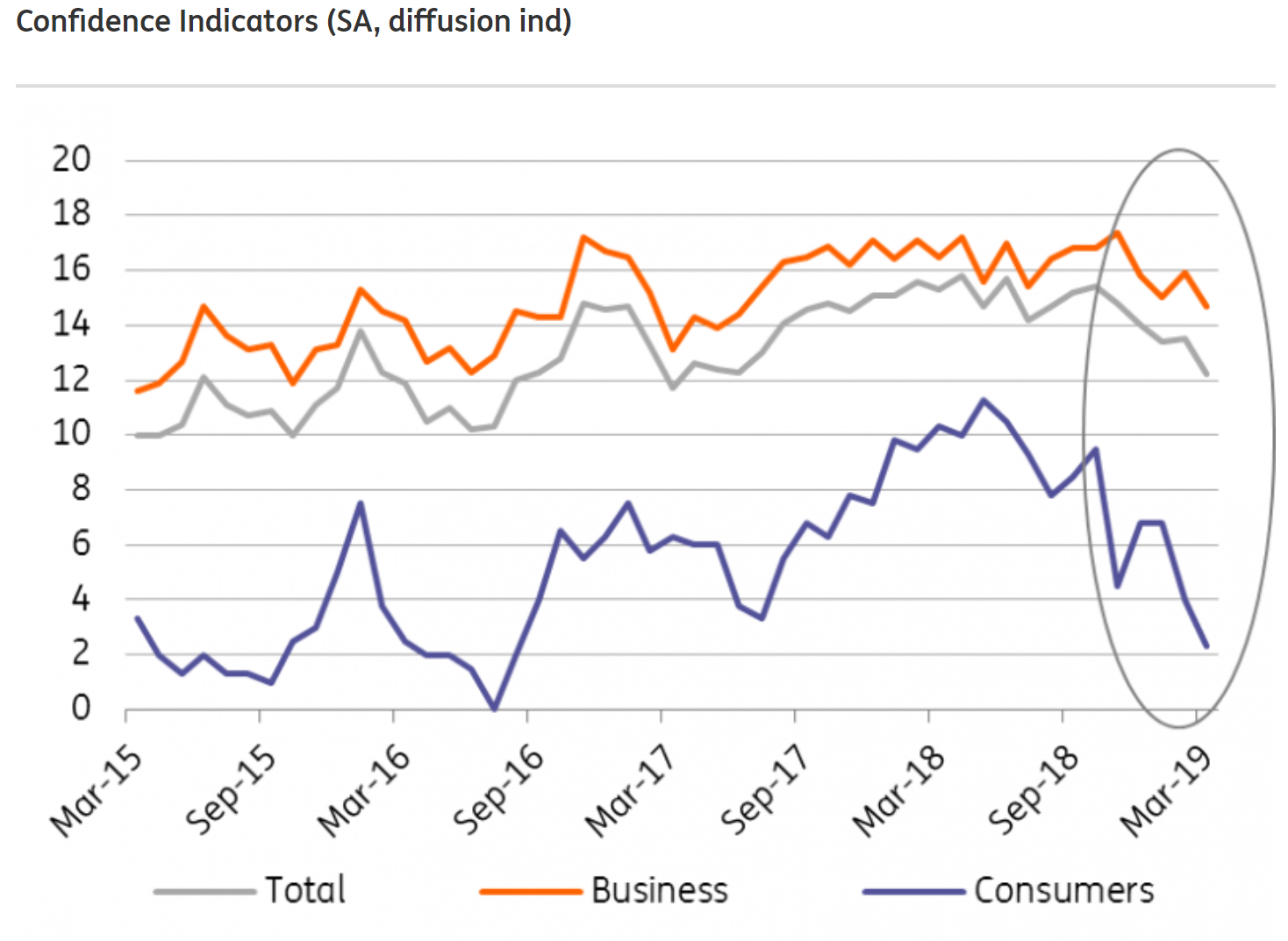 Overall business confidence for Czech firms also declined in March with sentiment in both manufacturing and services sectors declining while confidence in the construction sector edged higher.

The decline in confidence was centred around future prospects amid uncertainty over trade prospects over the next 12 months while firms’ assessments of the current business operating conditions remained broadly unchanged from February.

In the wake of recent global developments, weaker confidence is unsurprising. Developed market central banks have generally shifted towards neutral/dovish amid heightened expectations of a slowdown in global activity with a recent stream of weak data confirming activity remains subdued – read Eurozone PMIs. INGs chief Czech economist, Jakub Seidler, wrote “A further decline in Germany’s Manufacturing PMI this month does not bode well for Czech industry. The participants in the German PMI survey pointed out that lower orders were due to both weaker demand from the automotive sector and clients postponing decisions due to higher uncertainty.” Furthermore, persistent Brexit uncertainty alongside concerns over global trade, with US-Chinese negotiations in the spotlight at the moment, have weighed on both market sentiment and economic activity.

Despite lacklustre household confidence, ING’s Seidler expects that a solid underlying labour market and healthy wage growth could make household consumption one of the main drivers of Czech growth in the year ahead. Seidler added, “However, a prolonged period of uncertainty could raise concern further and reduce consumers’ appetite to spend, which represents a clear risk for the future outlook.” Monday’s confidence releases have underlined the current uncertainty facing both consumers and business and are expected to contribute towards an already anticipated hold on interest rates by the Czech National Bank (CNB) later in the week (Thursday). Summarising the bank’s view, ING’s Sediler commented “We expect the Czech National Bank to remain on hold next Thursday for the same reason it held rates steady in February: an uncertain global environment,” adding “The CNB board is likely to wait for a new forecast in May before any policy reaction. This should outweigh the weaker-than-expected Czech koruna and higher core CPI.” With the cross positioned at a multi-year high, the upcoming CNB releases alongside, and probably more critical to the cross, any progress on the Brexit front, could see the GBPCZK push higher into territory unseen since early 2017, especially if a benign Brexit scenario appears likely to unfold.