Germany’s Manufacturing Purchasing Managers’ Index released today was a complete shocker, plunging from 47.6 in February to 44.7 in March. The dismal reading was in stark contrast to the 48.0 number analysts were expecting, causing EUR/USD (FXE) to fall from around 1.1370 levels to sub-1.13.

It is worth noting that the EUR’s post-FOMC rally against the USD on Wednesday has been completely wiped out. Jerome Powell and his Federal Reserve committee members had surprised the markets with their projections for zero interest rate hikes in 2019, causing the USD to weaken broadly against its peers. 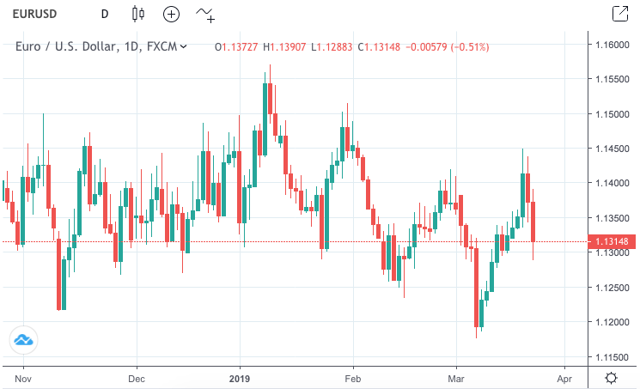 Looking at the historical Manufacturing PMI numbers for Germany, the chart paints a very bleak picture. Today’s number comes in at a 5-year low, and gives rise to concerns that the global economy may be slowing faster than expected. A PMI reading below 50 signals economic contraction, and though we have flirted briefly with the 50-mark in 2015 and 2016, the numbers are deep in contraction territory now. 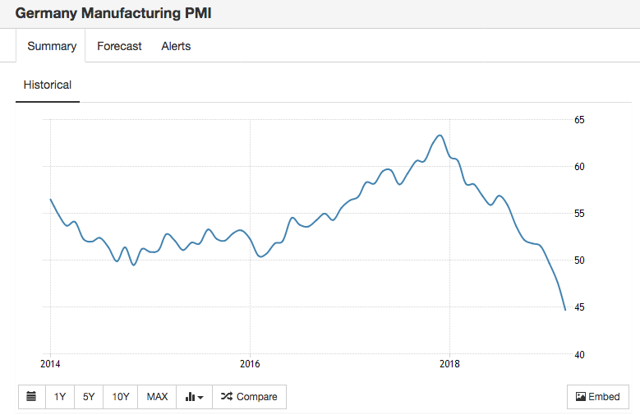 The number also goes far to show how the frosty trade relationship between US and China is hurting the broad global economy. China is one of Germany’s biggest export destinations, and the sluggish PMI numbers clearly show that China’s economy is stalling.

Within Europe, the UK is on the verge of leaving the European Union. The EU has offered the UK an extension of Article 50 to April 12, given the UK’s apparent inability to decide on a Brexit deal internally. Theresa May has failed twice to gather sufficient support to push her Brexit deal through, with parliamentary members amusingly voting “no” to her deals, and subsequently voting “no” to a no-deal Brexit scenario.

Despite the outcome of Brexit looking as clear as mud, the British Pound has found the legs to stage a rally, with the markets finding cheer that an extension to Article 50 may lead to the most ironic conclusion of all – a second referendum that could see British voters now choosing to Remain after 2 years of EU-UK negotiations.

Looking at the EUR/GBP chart below, the GBP has had a good year so far, rallying close to 5% against the EUR. The support at 0.84 now looks likely to be tested, and I would advise selling EUR buying GBP at market (0.8570) and to place a take profit target at 0.83 with expectation that the 0.84 support will break. This will be accompanied by a stop loss at 0.88. 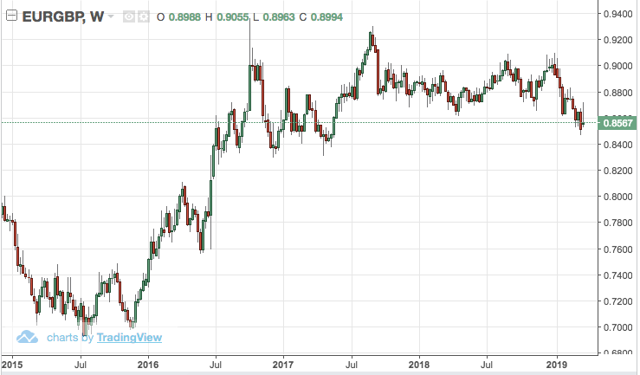