Republican lawmakers forged ahead with recommending funding levels for schools, universities and the stateâ€™s environmental agency Thursday, diverging with Gov. Gretchen Whitmer on education funding but adhering closely to her requests for funds to clean up drinking water.

House and Senate lawmakers moved six department budgets out of conference committee Thursday, including the school aid budget for K-12, higher education, community colleges, the Michigan State Police, the Department of Natural Resources and the Department of Environment, Great Lakes and Energy. More committees are currently scheduled for next week.

Complicating the process – Gov. Gretchen Whitmer isnâ€™t involved in negotiations at the moment. She and Republican leadership reached an impasse last night that both sides characterized as a dispute over proposed one-time road funding. Road funding is holding up Michiganâ€™s budget after all

Republican lawmakers and Gov. Gretchen Whitmer are at an impasse.

House Appropriations Chair Shane Hernandez, R-Port Huron, said in a statement heâ€™s ready to work with the governor â€œas soon as she stops spending all her energy playing political games.â€

The transportation budget hasnâ€™t come up in conference committee yet. But Republican House and Senate lawmakers took on the budgets that fund K-12 schools, community colleges and universities Thursday, reporting out a plan that would increase spending, but not as much nor in the same manner as Whitmer proposed.

The school aid budget as reported increases spending by 2.4 percent to about $15.2 billion, a little less than the 3.5 percent increase Whitmer proposed in her budget.

The plan includes $304 million to raise per-pupil spending between $120-240 per pupil, and eschews Whitmerâ€™s suggestion to move towards a weighted funding formula that addresses the higher costs of educating special education or at-risk students. 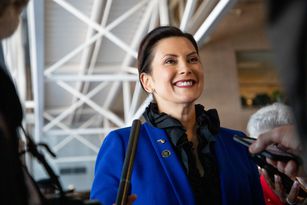 Legislative Republicans appeared to agree with Whitmer on additional spending for cleaning up drinking water.

In the Department of Environment, Great Lakes and Energy budget plan, $120 million was set aside for several water-related initiatives, including $40 million for addressing PFAS and other contaminants, $35 million for forgiving drinking water utility loans and $30 million for Lead and Copper Rule implementation.

The budget plans were reported without support from Democrats, who were especially critical of the K-12 plan.

Sen. Rosemary Bayer, D-Beverly Hills, said the proposed increase was â€œinadequateâ€ and isnâ€™t based on the specific needs of children and local districts.

â€œOur children deserve better,â€ she said. â€œWe can do better.â€

Rep. Aaron Miller, R-Sturgis, said he felt the school aid budget was a good product that accomplished many of the goals Whitmer outlined in her initial budget proposal.

â€œIâ€™m proud to stand beside it – I think it does a great job for educating our youth,â€ he said.

Michiganâ€™s next fiscal year begins Oct. 1. If officials canâ€™t come to an agreement on budgets before then, the government would go into shutdown.