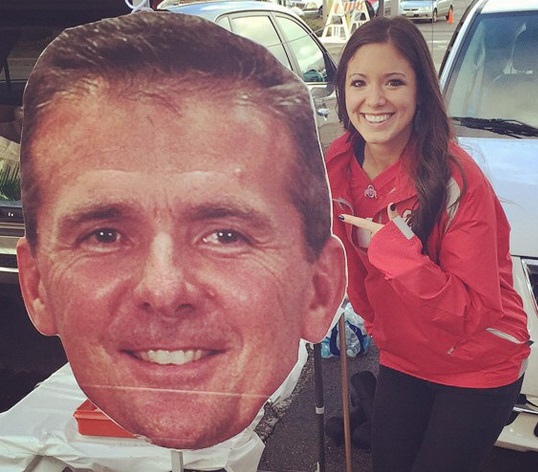 Urban Meyerâ€™s daughters are upset with an ESPN anchor for taking a dig at the former Ohio State head coach while reading a highlight on Saturday night.

Meyer attended the Fiesta Bowl College Football Playoff semifinal game on Saturday in Arizona between his former team and Clemson. Towards the end of the game, ESPN showed Meyer on the sidelines. That clip was included in ESPNâ€™s highlight package after the game, and anchor John Anderson decided to crack a joke while reading it.

â€œLook at Urban Meyer. He was going to spend time with his family, went to this game instead,â€ Anderson joked.

That was a reference to Meyer leaving his job at Florida to spend time with his family, only to go coach Ohio State the following season. Iâ€™ve made a joke about it in the past. So have others. Anderson did on Saturday, and the Meyer family did not find it to be funny.

Nicki Meyer, Urbanâ€™s oldest daughter, took issue with the comment, calling it â€œbadâ€ and telling ESPN to â€œhave some class.â€ Nickiâ€™s husband Corey Dennis is on Ohio Stateâ€™s coaching staff, which helps explain why the family was there.

How is this type of commentary even acceptable? The entire family including grandkids went to support my husband and the buckeyes. We had the best week in AZ. @ESPN have some class. This is bad. Iâ€™d @ this guy but donâ€™t know who it is. Pass it along friends https://t.co/rqAtv4pdGh

Urbanâ€™s younger daughter Gigi also commented to say the family was at the Fiesta Bowl all week.

But we were all there the entire weekâ€¦ In fact, probably been spending too much time together but keep â€˜em coming @espn https://t.co/BFmkmopNbq

And Urbanâ€™s wife Shelley said she was â€œdeeply offendedâ€ by the comment, noting Urban was there in a TV capacity and that their son Nate was standing next to the coach.

I am DEEPLY offended by this off-hand rude/ignorant comment by someone who knows NOTHING about our family-We were ALL together this bowl trip-urbans job was limited to a couple hours the 26th/27th and more on the 28th (not that itâ€™s anyoneâ€™s biz)-still WAY less than coaching. https://t.co/BgRDvx4cjb

The comment was clearly a joke and jab at Meyer, but his family took it literally and doesnâ€™t care.

Their reaction should not come as a surprise. They have repeatedly shown they are offended by anything they perceive as a slight towards Urban and that they will fiercely defend him. Their loyalty towards him is unwavering.