Brexit and the Euro

Shorting the euro is probably going to be fashionable soon as it weakens against the US dollar and the Swiss franc. The British pound may also gain against the euro once the Brexit agreement, whether hard or soft, is agreed upon as it is likely that the UK and the US will come to some sort of trade agreement before long. BoJo (Boris Johnson), the British Prime Minister, and President Trump seem to get along well together. Britain has so far made massive payments to Brussels and once the Brexit agreement or non-agreement comes into force, these payments will cease after the â€œtantumâ€ exit payment, whatever that will be. It is therefore reasonable to expect that the euro will suffer depreciation in forex markets due to withdrawal symptoms. The exact conditions will be known within a year and possibly sooner, so caution is advised at the moment. Even so, the euro will suffer psychological damage because of Brexit, and the impact of Britain leaving the EU may not already be fully priced in as future developments may alter GBP/EUR rates. 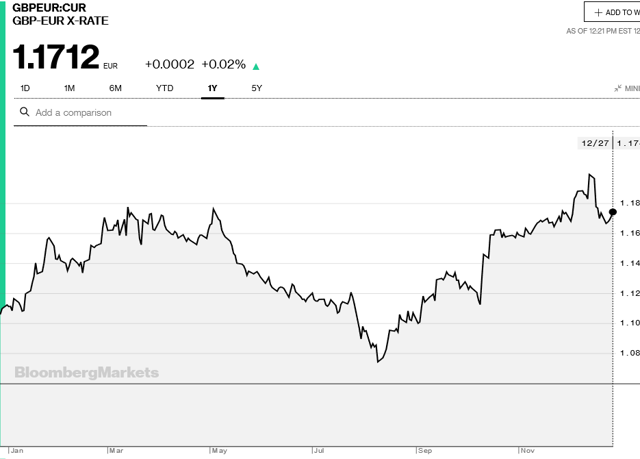 There is also the factor of leadership in the EU that should be taken into consideration. Ursula von der Leyen, the new President of the European Commission, served for many years as the German Minister of Defense. The German army, the â€œBundeswehr,â€ was criticized for not being particularly efficient under her tenure. Increased spending for the military may help to improve its efficiency. It remains to be seen what sort of leadership von der Leyen will provide the EU with in 2020. Traders dealing with GBP/EUR on forex markets are going to have a difficult time in 2020 as negotiations drag on.

The German economy is the most important in the EU, and a slowdown in Germany means that the euro will weaken against other currencies as Germany is one of the worldâ€™s most important exporters. In fact, the German economy is practically export-dependent. The most important trading partners are the US, France, China, the UK, Italy, Poland, Austria, Switzerland and Belgium. This factor should be taken into account when one wants to decide if the euro is going to continue being a strong currency or whether it will weaken in the near future. Given the economic slowdown evident in the graph below, it is reasonable to expect euro weakness in 1H2020.

German exports to countries outside the EU help to maintain the value of the euro. The German economy depends on exports for nearly half of its

production. The global slowdown currently taking place will have a strong effect on the German economy and consequently contribute to euro weakness.

The SNB has manipulated the value of the Swiss franc for several years in an attempt to avoid appreciation of the Swiss currency in order to promote and save Swiss manufacturing. 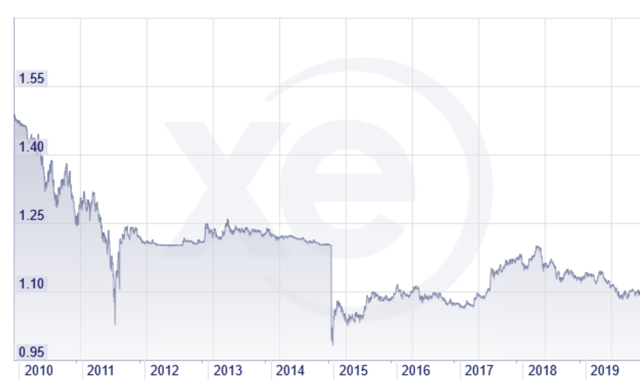 One can see from the above chart that the Swiss franc went from 1.20 to par with the euro when the SNB withdrew support from the euro in 2015. The Swiss franc is currently trading at around 1.08 against the euro as the euro has been constantly depreciating. What happened was that the SNB tactic of selling Swiss francs for euros in order to keep the value of the Swiss franc lower in relation to the euro was becoming too difficult as the EU economy is much larger than the Swiss economy. The euro recovered somewhat after 2015, going back up almost to 1.20. That means that it took CHF 1.20 to buy one euro. Since then the euro has again weakened, and it takes only CHF 1.08 to buy one euro.

The SNB policy of trying to keep the Swiss franc weaker against the euro has not been very successful as the euro continues to weaken. The SNB has resorted to buying US stocks, now over $90 billion worth, in order to weaken the Swiss franc against the US dollar while hoarding a large amount of euros. In fact, euros make up 39% of the currency reserves of the SNB, with the US dollar second at 36%, and the Japanese yen in third place at 9%.

There is thus a kind of contradiction in considering the Swiss franc a safe-haven currency and the SNB policy of trying to keep the currency from appreciating against other currencies. Despite all the efforts of the SNB, including keeping interest rates extremely low if not negative for government paper, the Swiss franc continues to be a strong currency.

SNB interest rates are practically negative and despite that the Swiss franc still maintains its status as a safe-haven currency. 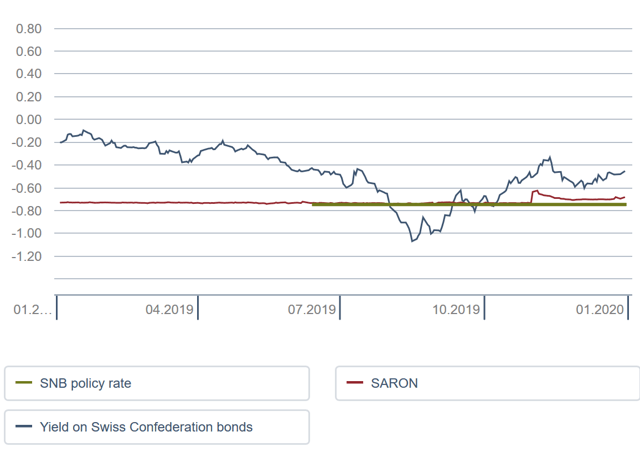 US investors can be fairly confident that acquiring Swiss francs with US dollars is going to be a good move, especially if the threats to US dollar global domination materialize in 2020 as they might well do. 2020 promises to be a pivotal year for the global economy. Having a portion of oneâ€™s portfolio denominated in Swiss francs will help to hedge against developments that negatively influence the US dollar as well as to anticipate euro weakness.

Additional disclosure: Data from third-party sources may have been used in the preparation of this material and WWS Swiss Financial Consulting SA (WWW SFC SA) has not independently verified, validated or audited such data. WWS SFC SA accepts no liability whatsoever for any loss arising from use of this information, and reliance upon the comments, opinions and analyses in the material is at the sole discretion of the user. Please consult your own professional adviser before taking investment decisions.
The comments, opinions and analyses expressed herein are for informational purposes only and should not be considered individual investment advice or recommendations to invest in any security or to adopt any investment strategy. Because market and economic conditions are subject to rapid change, comments, opinions and analyses are rendered as of the date of the posting and may change without notice. The material is not intended as a complete analysis of every material fact regarding any country, region, market, industry, investment or strategy.
All investments involve risk, including possible loss of principal. Stock prices fluctuate, sometimes rapidly and dramatically, due to factors affecting individual companies, particular industries or sectors, or general market conditions. Bond prices generally move in the opposite direction of interest rates. Thus, as prices of bonds in an investment portfolio adjust to a rise in interest rates, the value of the portfolio may decline. Special risks are associated with foreign investing, including currency fluctuations, economic instability and political developments.