Warning: Use of undefined constant REQUEST_URI - assumed 'REQUEST_URI' (this will throw an Error in a future version of PHP) in C:\xampp\htdocs\mbc1\wp-content\themes\jannah4\functions.php on line 73
 Apple (AAPL) Q3 2019 Earnings Preview: iPhone & China Sales – jj

Apple (AAPL – Free Report) stock still rests 13% below its 52-week high despite its roughly 30% climb in 2019 amid trade war worries and a slowdown in iPhone sales. Now, with some of the big banks set to unofficially kick off Q2 2019 earnings season on Monday, July 15, letâ€™s peek ahead to see what investors should expect from Appleâ€™s third-quarter fiscal 2019 financial results.

A downturn in chip stocks like Micron (MU – Free Report) , Nvidia (NVDA – Free Report) , and others are expected to play a significant role in this projected decline. But Apple, with its $941.72 billion in market cap, is also expected to drag the sector and the S&P down (also read: Previewing the Q2 Earnings Season). 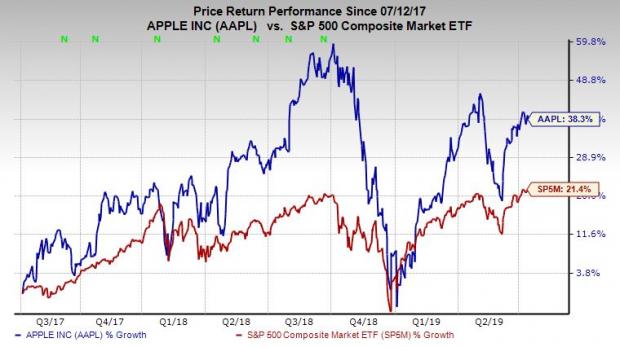 Whatâ€™s Going on with Apple?

As we can see, AAPL stock has fought its way back in 2019, despite its early May selloff. Apple fell, along with much of the market, on the back of renewed U.S.-China trade war fears. Nerves have calmed since then, and major U.S. indexes surged to new highs to start the second half the year after Presidents Trump and Xi Jinping decided to renew trade negations and not roll out new tariffs in what amounts to a trade cease-fire. Trump also said he would allow U.S. firms to once again work with Huawei.

Meanwhile, Apple spent the first half of the year trying to convince consumers that it takes user privacy very seriously. The move comes as worries mount that U.S. government regulators will take action against the likes of Facebook (FB – Free Report) and Google (GOOGL – Free Report) .

On top of that, Apple has jumped deeper into its services future. This includes its newer $9.99 a month magazine-heavy news service, a new Apple credit card in partnership with Goldman Sachs (GS – Free Report) , and a subscription-based gaming offering called Apple Arcade. Yet, aside from its Spotify (SPOT – Free Report) competitor Apple Music and its app store, the companyâ€™s soon-to-be-launched streaming TV service, called Apple TV+ could be a key growth driver down the road.

Appleâ€™s privacy and services push comes as the companyâ€™s iPhone sales slow. On top of that, the firmâ€™s growth in China has sputtered, compared to its recent strength. Apple posted better-than-projected top and bottom-line results in Q2, but they both marked a decline from Q2 2018. AAPLâ€™s adjusted earnings dipped 10%, with revenue down 5.1% to $58.02 billionâ€”worse than Q1 2019â€™s 4.5% decline.

Looking ahead to the end of July, our current Zacks Conesus Estimates call for the firmâ€™s adjusted Q3 EPS figure to sink 9.4% to $2.12 per shareâ€”but Apple almost always tops bottom-line estimates. Meanwhile, Appleâ€™s revenues are expected to come in roughly flat from the prior-year quarter at $53.3 billion.

Appleâ€™s iPhone revenue, which is still by far its largest source of revenue, is projected to dip roughly 13% from $29.91 billion in the year-ago period to $25.96 billion, based on our NFM estimates. This would mark the smallest downturn so far in fiscal 2019 for Appleâ€™s flagship product, which is a good sign for investors. Meanwhile, the companyâ€™s sales in China are actually expected to climb marginally from $9.55 billion in Q3 2018 to $9.59 billion.

Clearly, it appears that Appleâ€™s Q3 numbers, which could change as we get closer to its report, are projected to come in much better compared to the first two quarters of its fiscal 2019. We can also see that Apple has experienced small year over year revenue downturns before, and AAPL stock has been able to climb nonetheless.

More Stock News: This Is Bigger than the iPhone!

It could become the mother of all technological revolutions. Apple sold a mere 1 billion iPhones in 10 years but a new breakthrough is expected to generate more than 27 billion devices in just 3 years, creating a $1.7 trillion market.

Zacks has just released a Special Report that spotlights this fast-emerging phenomenon and 6 tickers for taking advantage of it. If you don’t buy now, you may kick yourself in 2020.

Again to the drafting board for Northside's Apple Avenue Market

Samsung's synthetic human Neon not like Bixby, to be unveiled at CES 2020

Get a free Apple iPhone 11 from T-Cell, right here is how