Warning: Use of undefined constant REQUEST_URI - assumed 'REQUEST_URI' (this will throw an Error in a future version of PHP) in C:\xampp\htdocs\mbc1\wp-content\themes\jannah4\functions.php on line 73
 The 10 Biggest Health Insurance Stocks – jj

Is health insurance a hot area for investors? Actually, yes.

With more baby boomers turning 65, Medicare rolls are swelling. Medicare Advantage plans have become increasingly popular. These plans are offered by private health insurers. And they provide all of the benefits covered by the original Medicare program and then some. Enrollment is also soaring for Medicare Supplement plans (also known as Medigap plans), whichÂ helps pay some of the out-of-pocket costs that Medicare doesn’t cover.

Many states have implemented Medicaid managed care programs. With these programs, states contract with health insurers or managed care companies to provide Medicaid health benefits at a fixed cost per person.

And with unemployment rates still at historically low levels, more individuals are working, which means they’re more likely to have health insurance through their employers.Â 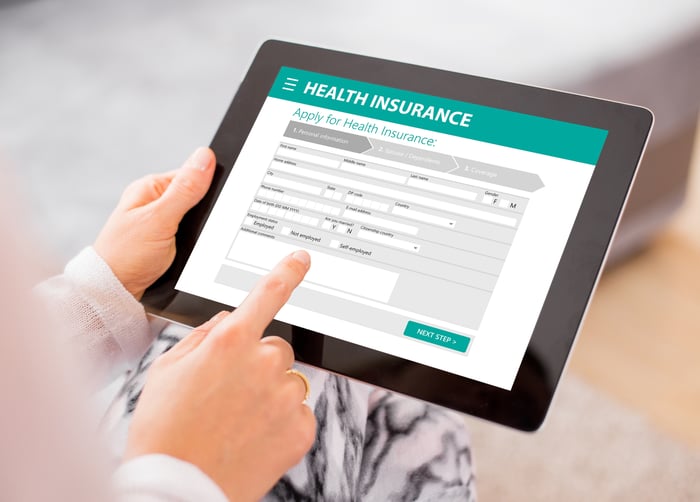 Increased enrollment in Medicare Advantage, Medicare Supplement, Medicaid managed care, and employer-sponsored health plans is music to the ears of major health insurers. They especially benefit from growth in these areas because the more members they add, the greater their economies of scale.

What are the biggest health insurance stocks?

The top 10 biggest health insurance stocks poised to profit from these trends are:

Here’s what you need to know about each of these big health insurers.

The company’s health insurance segment generates more than 80% of UnitedHealth Group’s total revenue. This segment is divided into four businesses:

The company has three segments. Its commercial and specialty business segment focuses on managed care products and services, as well as dental and vision insurance products. Anthem’s government business segment includes its Medicare, Medicaid, and Federal Employee Program (FEP) plans. The company’s “other” segmentÂ includes eliminations andÂ corporate expenses not allocated to either of its other two reportable segments.

The company is also launching a new PBM, IngenioRx. Anthem used Express Scripts as its PBM in recent years but decided to leave Express Scripts and start its own PBM after a highly publicized dispute between the two companies.

This acquisition created controversy as analysts and investors questioned the wisdom of the pharmacy giant expanding into health insurance. However, CVS Health felt the synergies and opportunities to “create a new front door to healthcare” made the Aetna acquisition a smart long-term growth strategy.

CVS Health is still in the process of fully integrating Aetna into its overall business. But Aetna already makes a big financial impact for the company, contributing nearly 30% of total revenue. Strong demand for its Medicare products continues to drive Aetna’s revenue growth.

A major acquisition made a greater impact on Cigna than CVS Health’s buyout of Aetna. In 2018, Cigna acquired Express Scripts, one of the biggest PBMs in the world.Â Prior to the acquisition of Express Scripts, most of Cigna’s revenue came from its commercial and government health insurance plans. That’s no longer the case.

Cigna now is organized into five business segments. The biggest in terms of revenue generation is the health services division, which consists primarily of the Express Scripts PBM business. This segment contributes around 70% of Cigna’s total revenue.

The company’s integrated medical segment includes the core operations of what could be called the “old Cigna” that existed prior to the Express Scripts acquisition. This segment continues to enjoy solid growth as premiums increase for its Medicare Advantage and Medicare Part D plans and as the company attracts more commercial customers.

Humana has been at the center of more deal rumors than any of the big health insurers on the list. The company was thought to be a potential buyout target for Walgreens Boots AllianceÂ orÂ Walmart.Â Humana and Aetna tried to merge in 2017 but the deal was blocked by a federal court.Â In June 2019, Humana squelched rumors that the company might acquire Centene.

There’s one significant deal that Humana did finalize, though. In the third quarter of 2018, the company acquired a 40% stake in Kindred At Home, which includes the former home health business of Kindred Healthcare and the hospice business of Curo Health Services.Â And whileÂ rumors that Walgreens might buy Humana haven’t panned out, the two companies are working closely together on one front: Humana is operatingÂ senior-focused primary care clinics within Walgreens stores in Kansas City.Â

The company makes more than three-quarters of its total revenue from Medicare Advantage plans, including individual and group plans. Humana’s second-largest source of revenue is its employer group business, which contributes nearly 10% of total revenue.Â

Centene ultimately didn’t become an acquisition target for Humana. However, Centene plans to make a major acquisition of its own by buying Wellcare Health Plans. The combination of the two companies would make Centene the fourth-largest health insurer in the country.

Shareholders of both Centene and Wellcare have approved the acquisition. Federal and state regulators must also OK the deal. The companies expect that the transaction will be finalized in the first half of 2020.

In the meantime, Centene continues to focus largely on the Medicaid managed care market. The company makes more than two-thirds of its total revenue from Medicaid. This is significantly higher than in the past primarily because of Centene’s 2018 acquisition of Fidelis Care.

Centene also has a significant presence in the commercial and Medicare plan markets. The company competes in several state Health Insurance Marketplaces established after the implementation of the Affordable Care Act (ACA). Centene’s Medicare business markets Medicare Advantage and Medicare Supplement plans, as well as special plans approved by Medicare.

It makes sense that Wellcare Health Plans would attract interest from Centene. The two companies’ businesses are similar.

Like Centene, Wellcare makes most of its money — nearly two-thirds of total revenue — from its Medicaid operations. Wellcare’s Medicaid business focuses on five states: Florida, Illinois, Kentucky, Michigan, and Georgia. The company has expanded its presence in Florida especially, winning a five-year contract to provide statewide managed care services to children with medically complex conditions. It went into effect in February 2019.

Wellcare’s 2018 acquisition of Meridian enabled the company to enter the PBM business. In addition, the deal gave Wellcare a small footprint in Michigan’s Health Insurance Marketplace.

Molina Healthcare’s business model is also similar to those of Centene and Wellcare. Molina focuses on the “three Ms”: Medicaid, Medicare, and marketplaces (Health Insurance Marketplaces, that is).

Molina makes around 14% of its total revenue from its Medicare business. A large portion of this Medicare revenue comes from premiums received from Medicare Advantage Medicare-Medicaid plans (MMPs), which provide integrated benefits for individuals who are eligible for both Medicare and Medicaid.

Around 10% of Molina’s total revenue comes from marketing plans on Health Insurance Marketplaces. The company is especially strong in the Texas market, but also generates significant revenue in California, Florida, Michigan, Ohio, and Washington.

Magellan Health could soon be gobbled up by another health insurer. Anthem and UnitedHealth Group are two top companies reported to be potentially interested in acquiring Magellan.

The company makes around one-third of its total revenue from its pharmacy management segment. This segment primarily consists of Magellan’s PBM operations.

The company makes most of its money from commissions earned when customers buy insurance plans through its platform. Nearly 40% of Health Insurance Innovations’ total revenue comes from commissions on short-term medical (STM) plans. The STM market should continue to be a strong growth driver for the company in the future, especially with a new rule implemented in October 2018 that allows for longer-duration STM products.

STM plans provide individuals with coverage for only a limited period of time, usually for up to six months although some plans provide coverage for up to 12 months. They’re typically purchased by individuals who are between jobs, waiting for other health insurance to start, or who have recently turned 26 and can’t be covered by their parents’ insurance any longer. However, STM plans aren’t legally required to cover all of the benefits that other health insurance plans do.

There’s a risk for Health Insurance Innovations with its dependence on selling STM plans, though. Some politicians oppose marketing the plans because they don’t provide enough benefits. While the Trump administration has promoted STM plans, a future presidential administration could make changes that negatively impact Health Insurance Innovations.

Health Insurance Innovations’ acquisition in June 2019 of TogetherHealth gives it a new opportunity to reach the senior market. TogetherHealth operates a platform for individuals to connect with insurance companies with a special focus on the over-65 insurance market.

Risks for these health insurance stocks

Each of these 10 large health insurance stocks faces risks that are common to any kind of stock. For example, a major economic slump or increased competition could cause any of these stocks to underperform.

All of these stocks (with the notable exception of Health Insurance Innovations) also face what’s called an underwriting risk. When health insurers don’t accurately estimate the risks linked with providing insurance coverage to specific individuals or groups, they can charge premiums that aren’t enough to cover the medical costs incurred.

The health insurance industry should continue to be a hot area for investors thanks in large part to demographic trends. But if sweeping regulatory changes are introduced, health insurance stocks could become more like a hot potato that no one wants to hold.

Despite the risks, investing in health insurance stocks could very well be lucrative over the long run. As baby boomers in the U.S. age, Medicare enrollment will increase, with especially strong growth likely in Medicare Advantage plans.Â

Which of these 10 biggest health insurance stocks is the best choice for investors right now? CVS Health is probably the top pick. The company pays the highest dividend yield (dividends paid as a percentage of share price).Â CVS Health’s pharmacy focus also should enable it to benefit more from the overall increase in demand for healthcare than the others on the list.Â