Warning: Use of undefined constant REQUEST_URI - assumed 'REQUEST_URI' (this will throw an Error in a future version of PHP) in C:\xampp\htdocs\mbc1\wp-content\themes\jannah4\functions.php on line 73
 Jennifer Lopez gives USWNT's Carli Lloyd a lap dance: Watch – jj 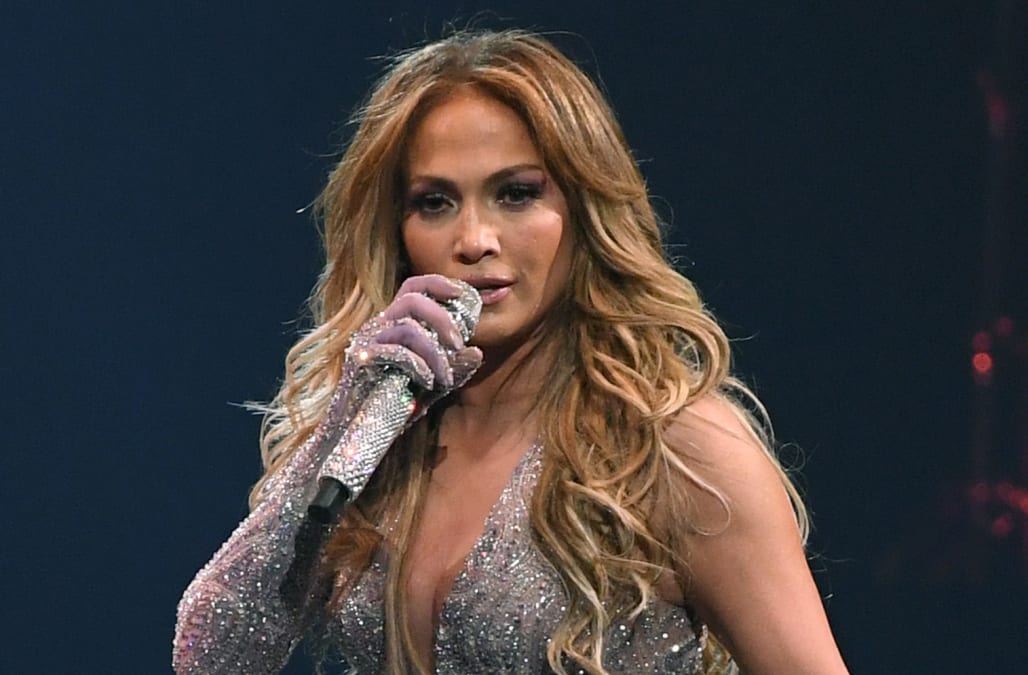 Is it hot in here, or is that just us?

Jennifer Lopez took the stage at Madison Square Garden for the first of her two-night sold out stint in New York City on her It’s My Party Tour, which is leading up to her 50th birthday in two weeks, and she brought an unexpected special guest onto the stage for a lap dance.

SEE ALSO: Jennifer Lopez flaunts her abs ahead of her 50th birthday: ‘Queen of aging backwards’

Midway through her lively, hits-filled set, J.Lo opened up about the fact that, while she enjoys getting gifts for her birthday each year, what she really likes isÂ giving gifts to others. Wearing a sparkling white performance costume, Lopez told the crowd that one special person would be getting a gift from her that night — and it was U.S. Women’s National Soccer Team player Carli Lloyd, who was in the audience.

After asking security to escort Lloyd from her seat on the floor to the stage (and explaining that she normally would bring a man up onstage during this part of her show), Lopez previewed what Lloyd was in for in footage captured by AOL’s Gibson Johns.

J.Lo the disappeared from the stage for a costume change as two dancers in animal-print leotards and over-the-knee boots handcuffed Lloyd to a cushy, high heel-shaped chair. Lopez returned in an outfit that matched her sultry dancersÂ as “Birthday Sex” by Jeremih played in the background, before proceeding to give the soccer star a de facto lap dance.

The singer then transitioned into a slowed-down version of her debut single, “If You Had My Love,” as she continued to dance for the World Cup champion.

During the show, Lloyd reacted to footage of her dance with Lopez making the rounds on Twitter, writing, “A first time for everything.”

Making the moment even more memorable was the fact that Lopez’s fiancÃ©, Alex Rodriguez, was front and center for the entire concert along with several of their respective children. The former baseball player, who was wearing a full suit at the show,Â appeared to enjoy the moment himself, too.

Jennifer Lopez with Alex Rodriguez and their kids

Great time at the Laker game with the kiddies last night!!! Thank you @gunnarfitness @lakers @magicjohnson

Me and my three favorite girls #Emme #Ella #Tashi???

Macha 13,
I canâ€™t believe itâ€™s been two years. Only 730 days, which have flown by, but it feels like we have been together forever. We are meant to be, and how much you mean to me cannot be put into words.
.
From baseball games, to traveling across the world to shows in Vegas. We have done it all together and every moment with you is cherished. Where this road will take us next is unknown but there is no one else I would rather have by my side. The journey is just beginning and I am excited for whatâ€™s ahead.
.
Macha, your hard work is unmatched. Your relentless drive and determination push me to be a better man each and every day.
.
Like you there is none other. Words will never do justice to what the last two years have meant to me. Thank you for always being you, for your unwavering support and unconditional love.â¤ï¸
.
Te amo mucho, Lola.
.
– Macho 13
@jlo

The best times are with these lil ones… ??? #ilovechristmastime #familia

About last night… Perfect way to start the year… Love that they still wanna fall asleep in Mamaâ€™s arms â™¥ï¸â™¥ï¸??

When we were kids, birthdays were exciting because it was all about the gifts we would be getting. A new bat, dance shoes, maybe a new CD (yes Iâ€™m old!). I see firsthand how thatâ€™s changed for Jennifer, and how sheâ€™s found joy in sharing with others. For someone who has been about giving everything she has 365 days a yearâ€”to our children, our families, the worldâ€”I hope today, we can give you all the happiness you deserve. I love you mucho Macha 13. â¤ï¸

Sugar and spice and everything nice… ?? #E&E #thankheavenforlittlegirls

Today has an entirely different meaning to me than I did when I first became a father to Tashi and then my Ella Bella. Itâ€™s an incredible responsibility, and one I have always treasured. But as I grow older and proudly watch them doing the same, not only are my kids my pride and joy and number one priority – now they also motivate me. Every day, Tashi and Ella make me a better dad and a better person. Being a father is the greatest job in the world, more than any career I could have dreamed of as a kid. To all the fathers out there, never stop trying to be the best. I donâ€™t. #HappyFathersDay

Of course, Lloyd’s appearance onstage was just one of the many highlights from Lopez’s epic show, which lasted for over two hours and featured every single one of her hits from over the years: “Waiting For Tonight,” “On The Floor,” “All I Have” and everything in between.

While performing “Limitless,” the ballad from her latest film, “Second Act,” the 49-year-old singer brought out her daughter, Emme, 11, who shared a duet with her famous mom and wowed the crowd with her vocals.Â

Lopez was visibly emotional at several moments during her concert at Madison Square Garden, with the Bronx native seemingly feeling extra appreciation for her supportive hometown crowd.

AOL attended Jennifer Lopez’s It’s My Party Tour at Madison Square Garden with Chase Sapphire, checking out the exclusive Chase Sapphire Lounge, one of the many offerings given to cardholders, ahead of the show.

UP: Learn this information earlier than leaving the home on Thursday, this can be a giant change within the climate

Powers on however No Video v2