Warning: Use of undefined constant REQUEST_URI - assumed 'REQUEST_URI' (this will throw an Error in a future version of PHP) in C:\xampp\htdocs\mbc1\wp-content\themes\jannah4\functions.php on line 73
 Reinsurance Could Protect Taxpayers From More NFIP Borrowing After Barry – jj

The impending strike of Tropical Storm Barry on Southeast Louisiana, coming at a moment when the Mississippi River is cresting at heights not seen since 1927, has many fearing a replay of the devastation wrought by Hurricane Katrina in 2005. Barryâ€™s flooding could be severe, though it does not pack anything close to Katrinaâ€™s Category 3 winds of 100-140 miles per hour.

Unlike in 2005, the National Flood Insurance Program currently has claims-paying resources to absorb a Katrina-sized event. Indeed, thanks to recent steps to shift some of the federal programâ€™s risk to the private reinsurance and capital markets, if Barryâ€™s flooding proves more on the order of Hurricane Harvey or Superstorm Sandy, the NFIP may not even need to add to its current $20.5 billion debt.

According to the NFIPâ€™s most recent quarterly report, the program has $3.92 billion of cash available in its flood fund and another almost $950,000 in its reserve fund. When combined with its $9.9 billion of borrowing authority â€“ what remains under the programâ€™s $30.425 billion cap after Congress voted to forgive $16 billion of NFIP debt in October 2017 â€“ that means the NFIP would have $14.77 billion of claims-paying authority.

But the program also has additional $1.82 billion of reinsurance coverage under one traditional and two capital markets deals it has placed over the past year, bringing its total resources up to $16.59 billion. Thatâ€™s more than the $16.26 billion the program paid out for Katrina, the largest flood event in NFIP history.

Harvey and Sandy â€“ at $8.9 billion and $8.8 billion, respectively â€“ are the second and third-largest NFIP events of all-time. Given the programâ€™s $4.87 billion in cash on hand and the terms of its reinsurance deals, the NFIP likely would be able to cover an event of near or roughly that size without needing to borrow much at all.

All told, FEMA has paid $280 million for the $1.82 billion of reinsurance currently in effect. Provisions of the Biggert-Waters Flood Insurance Reform Act of 2012 encouraged these sorts of risk transfers to protect taxpayers and better ensure the programâ€™s solvency. FEMA first engaged the reinsurance markets in a significant way with a $1 billion placement in 2016. In 2017, it ended up collecting the full $1.042 billion of reinsurance it had placed under a deal that cost just $150 million.

Based on Federal Emergency Management Agency policy statistics as of September 2018, the NFIP has $107.76 billion of insurance in-force in 17 Louisiana parishes currently under various kinds of tropical storm or flood watch, led by $29.32 billion in Jefferson Parish and $22.82 billion in Orleans Parish. Three counties in coastal Mississippi â€“ Hancock, Harrison and Jackson â€“ also are under storm watch and combine for $10.95 billion of NFIP insurance in-force. 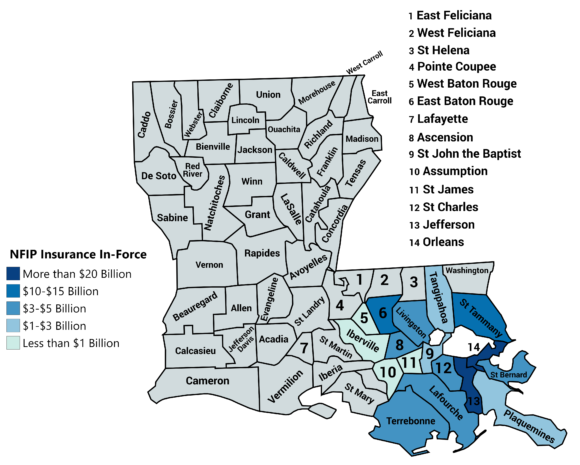 Want to stay up to date?

Get the latest insurance news
sent straight to your inbox.

Meet 'Bubba' Almony: Hanover native 'dwelling a dream' as bodyguard to the wealthy and well-known

Apple Q1 earnings will put its China rebound in focus