Warning: Use of undefined constant REQUEST_URI - assumed 'REQUEST_URI' (this will throw an Error in a future version of PHP) in C:\xampp\htdocs\mbc1\wp-content\themes\jannah4\functions.php on line 73
 Why Apple's Current Downgrade Doesn't Trouble Me At All – jj

Itâ€™s never fun when you see an analyst publish a bearish note about one of your holdings. Thatâ€™s especially the case when itâ€™s your largest holding and the analyst is calling for ~25% downside. Right now, Apple (AAPL) makes up nearly 9% of my portfolio, so obviously a 25% hair cut here would do significant damage to my net worth (in the short-term, at least). Iâ€™m sure that Iâ€™m not alone when it comes to owning a large position in this name and Iâ€™m sure that Iâ€™m not the only one whose stomach churned a bit when they saw this headline. Fear is a normal human response. However, acting on it is oftentimes irrational and thatâ€™s why I wanted to sit down and write this piece.

When thinking about this recent downgrade, I think itâ€™s really important to acknowledge that analyst notes should generally always be taken with a grain of salt. Professional analysts certainly donâ€™t own working crystal balls. And, while the recent bearish call by Rosenblatt citing â€œdeteriorating fundamentalsâ€ (which certainly sounds scary, doesnâ€™t it?) included a price target of $150, itâ€™s also worth noting that this is the lowest price target on the Street. There are 38 other analysts who cover this stock and Appleâ€™s average price target right now is $213.03. So, instead of getting frazzled by just one analyst’s opinion, I think itâ€™s probably best to take a step back and look at the broader picture as a whole.

The Rosenblatt report was focused on the prospects for disappointing new iPhone and iPad sales. The analysts donâ€™t think that sales growth from other items (HomePod, AirPods, and the Apple Watch) will be able to make up for the second half slowdown in the companyâ€™s primary sales drivers. Iâ€™m not denying that the risks Rosenblatt brings up could be true. I think weâ€™ve entered into a new world in terms of new phone demand. People arenâ€™t lining up around the corner for every new iPhone release. Phones just havenâ€™t progressed enough in terms of new capabilities and the hardware refresh cycle has been extended because of it. This isnâ€™t just an Apple issue, itâ€™s a phenomenon that weâ€™re seeing industry wide. However, even if iPhone sales disappoint in the second half, I see no reason for it to result in a 25% selloff.

At Appleâ€™s current ~$200 share price, shares are trading for 17.4x 2019 EPS estimates of $11.45. This would be a large premium for a hardware name, but at this point in time, I think Appleâ€™s services segment has allowed the company to ascend from that old niche. To me, a market multiple makes sense for a name like AAPL and I think if it went much lower, weâ€™d be talking about significant undervaluation. 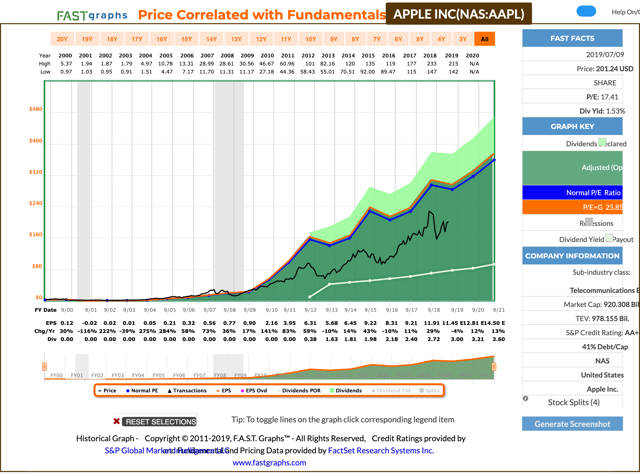 If AAPL shares were to sink to the Rosenblatt $150 price target, weâ€™d be talking about a 13x 2019 multiple. Analysts are currently projecting 12% EPS growth in 2020 for AAPL, so using that $12.81 forward EPS consensus estimate, weâ€™d be talking about a forward P/E ratio of just 11.7x. And, if youâ€™re willing to look out 30 months to the current 2021 consensus EPS estimate of $14.50 (which represents another 13% growth year on top of the 2020 estimate), we arrive at a 10.3x forward estimate. Maybe the analysts at Rosenblatt donâ€™t have such bullish outlooks, but to me, when I look at these double digit forward growth prospects and the incredibly cheap multiples that the $150 price target would carry, I donâ€™t worry much because I have a hard time seeing one of the greatest companies on earth trading with those types of bargain barrel multiples.

Sure, the majority of its sales and earnings come from hardware which have historically been given sub-market multiples. Hardware is easily disrupted and thought of as a commodity business; however, during the companyâ€™s most recent quarter, the high margin services segment represented 19.8% of sales. Services growth is slowing sequentially, but as time progresses I suspect that it will continue to become a larger and larger piece of the pie when it comes to Appleâ€™s overall sales. And, since service margins are nearly twice as high as the companyâ€™s overall gross margin (overall is 37.6% last quarter versus 63.8% for services), it makes sense for Appleâ€™s multiple to expand.

The high margin and growth of the services segment is why I donâ€™t fret when I see bearish calls for new phone sales. These sales used to be Appleâ€™s life blood, but now, the company doesnâ€™t need to make record breaking sales numbers to generate the strong cash flows that investors are used to seeing. At the end of the most recent quarter, Appleâ€™s management highlighted the fact that there are ~1.4b active Apple devices. Even if refresh cycles elongate due to less demand for the latest and greatest device, over time the active device count continues to grow due to ancillary technology that Apple continues to put into the market combined with the older phone models that consumers continue to love. All of these devices (new or old) are further monetized by the services segment.

To me, the biggest risk that Apple faces isnâ€™t hardware sales growth headwinds, but instead an escalation of the trade war with China. Hardware sales can be expected to fluctuate over time, but issues in the greater China market (which represented roughly 17.5% of Appleâ€™s sales during the last quarter) could turn out to be a big future growth hurdle for this name. Appleâ€™s Chinese sales percentage used to be a bit higher, but sales have already slumped in the region. There are fears that Apple could be a target of the Chinese government should trade relations get worse. At this point, the idea of Apple being a politicized scapegoat is speculative. But, I think itâ€™s worth considering since it could create a big dent in Appleâ€™s bottom-line. Even so, geopolitical speculation still isnâ€™t enough to make me want to sell my AAPL shares. In a worse case scenario, looking at trade and/or the near-term hardware sales seasons, AAPL will remain a highly profitable company with a strong balance sheet and cash flows.

While the analyst at Rosenblatt brings up serious risks that Apple investors need to consider when monitoring their positions, at the end of the day, I have a hard time focusing on much else other than shareholder returns. For years, Appleâ€™s growing dividend and massive buyback program have been at the forefront of my mind as an investor. I didnâ€™t buy Apple shares until the company initiated its dividend and now I firmly believe that this is one of the best dividend growth investments in the market today. Since initiating its dividend in 2012, AAPLâ€™s split adjusted dividend has increased from $0.38/share to $0.77/share. In other words, in roughly 7 years, the stockâ€™s dividend has more than doubled. I expect to see similar performance over the next 7 years as well. With this in mind, itâ€™s easy for me to maintain a buy and hold mindset when it comes to AAPL stock (even in the face of such negative analyst remarks).

I have to admit that AAPLâ€™s recent 5.5% dividend increase was a disappointment. Prior to this yearâ€™s increase, AAPL had been in the habit of rewarding investors with double digit dividend growth. In the past, Iâ€™ve said that I believe AAPL has the potential to provide investors with a double digit dividend growth CAGR moving forward over the long-term. This 5.5% increase was obviously a bit of a speed bump in that regard, but I think itâ€™s too soon to say that this mid-single digit increase is going to be a trend.

More than anything, it appears to me that AAPLâ€™s management would rather use its cash reserves to buyback shares at the moment. I know that certain investors have been disappointed about the ratio of buybacks to dividends when looking at AAPLâ€™s shareholder returns. Yet, for those who have a long-term mindset, massive buybacks in the short-term should actually go a long way towards making longer-term dividend growth more sustainable. Apple has been extremely successful in reducing its outstanding share count. Over the last 5 years alone, this companyâ€™s buyback has retired roughly 21% of its outstanding shares. Lower share counts reduce the burden of a rising dividend on the balance sheet/cash flows. They also increase EPS, which helps to support a safe dividend payout ratio.

There isnâ€™t another company on Earth returning as much money to shareholders as this one is. AAPL is a name that has generated sales of nearly $260b during the trailing twelve months. These sales translate into nearly $72b of operational cash flows and nearly $59b of free cash flow over this same period of time. These cash flows mean that this companyâ€™s massive shareholder returns are sustainable (and this doesnâ€™t even take into consideration the huge cash hoard that AAPL has built up over the years).

Is focusing primarily on shareholder returns a bit simplistic? Probably. But, as a long-term shareholder, I think itâ€™s a much better thing to do than worrying too much about short-term hardware sales and market sentiment. To me, this $920b company isnâ€™t one to trade, but instead, to own. AAPL has been generating massive wealth for shareholders for decades now and while the past certainly isnâ€™t an accurate means to predict the future, if I had to guess, when looking at this companyâ€™s products, its IP, its talent, its management team, its balance sheet, its operational results, and its current valuation, Iâ€™d say that AAPL is a name that is likely to continue to do so far into the future.

This article was previously published for members of The Dividend Growth Club.

If you enjoyed this content and want to see more like it, please check out my Marketplace service: The Dividend Growth Club.Â Â

Disclosure: I am/we are long AAPL. I wrote this article myself, and it expresses my own opinions. I am not receiving compensation for it (other than from Seeking Alpha). I have no business relationship with any company whose stock is mentioned in this article.

Gujarat: Rajkot Collector denied the charge of bribing journalists | Collector paid bribe to journalists with a check of 50 thousand! Spoke in a clean