Warning: Use of undefined constant REQUEST_URI - assumed 'REQUEST_URI' (this will throw an Error in a future version of PHP) in C:\xampp\htdocs\mbc1\wp-content\themes\jannah4\functions.php on line 73
 Apple Loyalty plunges 15 % in 2019 – jj

According to a new survey, people are moving towards Android devices from Apple iPhones as there is 15 percent of decline in Apple retention from last lastâ€™s March report.

BankMyCell has surveyed 38,043 consumers who are trading their smartphones in which 26 percent of iPhone X users are moved to another brand, 18 percent of iPhone users switched to Samsung, while 7.7 percent Samsung users changed their phones with iPhone and 92 percent Android users traded with Android phones. 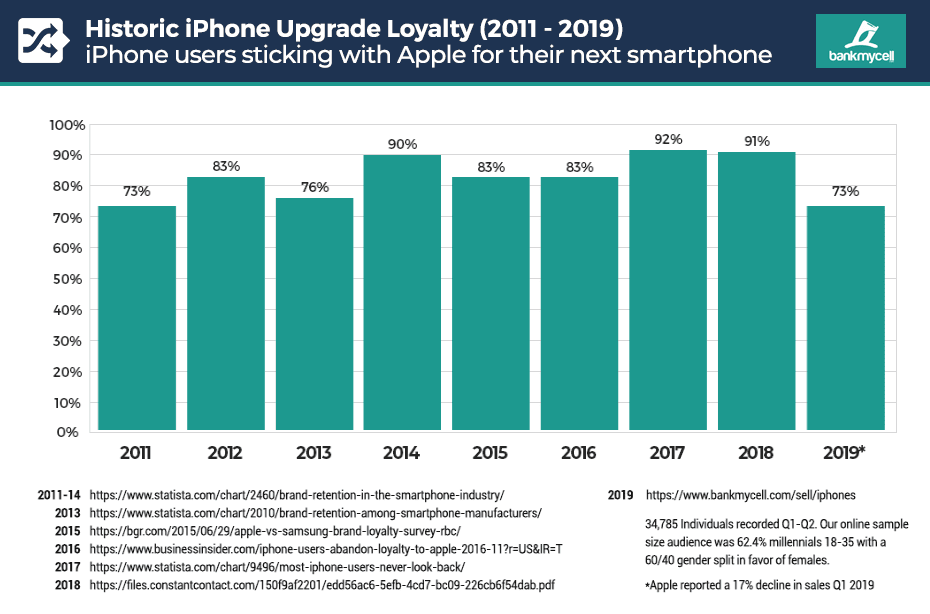 By using its all data, BankMyCell says that Apple loyalty is dropped down to the lowest point as compared to 2011. In 2011, there were 92 percent users of it. While, currently, it has 73 percent users.

However, it should be noted that the sample size of survey is not that large. It comprised of only BankMyCellâ€™s services users. There are several other companies who published their reports and surveys. One of them is Consumer Intelligence Research Partners (CIRP). According to CIRP iOS loyalty is increasing day by day. According to its report the usage was 91 percent in December 2018.

Furthermore, there are reports of Kantar and Gartner on same subject. Kantar report says that iPhoneâ€™s sales have dropped down by 2.4 percent as compared to last year. There is 36 percent sales of iPhone in USA. Similarly, Gartnerâ€™s report says that all mobile companies are facing slippage in sales. Therefore, Apple is also facing some fall.

According to Gartner, the mobile companies have faced the fall of 3.8 percent, because the new updates is not providing significant features and upgrades.

Read next: Here Are The World’s 20 Most Visited Website In July 2019, According To Alexa Ranking

JOKES: Ballu went to the boss and stated, Bibi is asking to roam