The study looked at over 3 billion measurements from more than 23 million devices from April 1 to June 30, 2019, concluding that Samsung users in the U.S. experienced download speeds 8.2Mb/s faster than iPhone users on average. 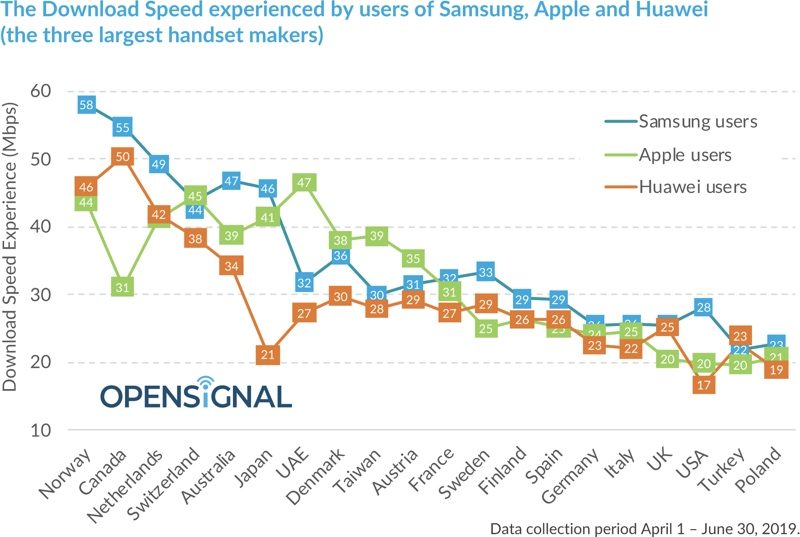 All in all, Apple’s iPhones were faster than Samsung and Huawei (the third most popular worldwide smartphone) in Brazil, Costa Rica, Kuwait, Morocco, Saudi Arabia, Taiwan, and UAE. 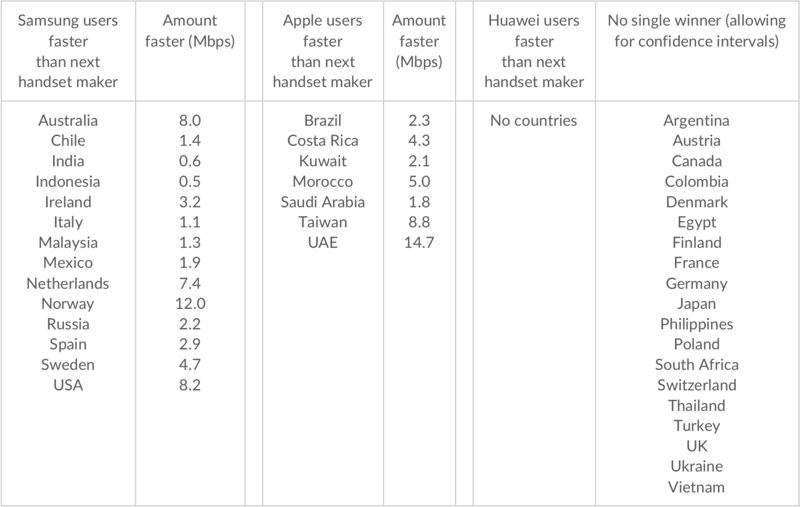 Opensignal’s testing split smartphone users into three groups (low, mid, and high-tier) based on each smartphone’s mobile network capabilities, with the highest tier representing the newest smartphones with technology than Opensignal says is more sensitive to mobile network improvements.

Higher-tier Samsung users saw faster speeds than Apple and Huawei users with global download speeds of 26.6Mb/s vs. 25.1Mb/s (Apple) vs. 24.4Mb/s (Huawei), but Apple users saw the fastest speeds of the three in the mid-tier category, which included the iPhone XR, X, and 8, along with the Samsung M40 and A80 and others.

Middle tier iPhone users, which make up the bulk of Apple users, saw speeds of 16.5Mb/s, compared to 16.3Mb/s for Huawei users and 14.4Mb/s for Samsung users. Samsung ultimately won out in the higher-tier smartphone category (aka the newest devices) and won the overall speed contest because most iPhone users have iPhones with slower modem hardware.

Samsung and Huawei have prioritized “Gigabit” LTE modems over the course of the last few years, while Apple’s only devices with modems in that class are the iPhone XS and the XS Max. Even the iPhone XR, a 2018 device, doesn’t have an LTE modem comparable to the modem chips Samsung has been using for the last couple of years.

Apple’s challenge is that few of its current models are high-tier devices when we group iPhone models based on their mobile network experience capabilities. In our measurements, just 14% of Apple users are high tier. Instead, Apple has chosen to focus its handset designs on other capabilities such as facial recognition, camera innovation, long battery life, and extremely fast application processors and graphics using Apple’s in-house silicon designs.

While all Samsung and Huawei flagship models for the last couple of years have featured so-called “gigabit” capable modem designs — LTE Category 16 and above — only the iPhone XS and XS Max have such capability. Even the current iPhone XR includes a less-capable LTE Category 12 modem, which we therefore class as a mid-tier smartphone on mobile network experience.

Apple’s 2019 version of the iPhone XR is expected to feature faster LTE speeds that may eventually help Apple gain an edge over Samsung. The looming worldwide adoption of 5G will also shake things up, though Apple is not set to start debuting 5G capable devices until 2020, while Samsung already has 5G devices in 2019.

More detail from Opensignal’s report can be found on the Opensignal website.

Bhajan Singer Anup Jalota Mom Kamala Jalota Funeral Pictures – These individuals, together with Anup Jalota, Vindu Dara Singh and Pankaj Udhas, who had been seen on the shoulders of mom

25 wells within the park in Hisar for Water harvesting | Know, why two aged individuals of Hisar spent their pension in parks and constructed 25 'properly'