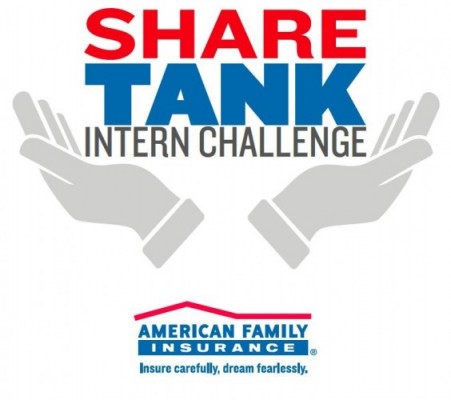 The Share Tank Intern Challenge, based upon the hit ABC show â€œShark Tank,â€ encourages interns to unleash their creative sides while learning about and practicing American Familyâ€™s philanthropic culture.

At the beginning of the summer, interns were paired into cross-divisional teams and assigned a nonprofit.Â From there, they worked together to solve a problem the organizationÂ faces â€“ with a budget of only $10,000.

Intern teams presented their solutions to a panel of judges made up of American Family leaders one one winning team was chosen.

The Share Tank concept was created in 2016 by Amy Wilcox, American Family talent acquisition administer, as a way to teach interns about American Familyâ€™s philanthropy and commitment to community investment.

Wilcox says some interns do much more than participate in the Challenge.

â€œOur interns do an amazing job pitching solutions to real-world issues that local nonprofits are experiencing,” said Wilcox. “But beyond that, many interns have forged relationships with their nonprofits that have lasted far after Share Tank has concluded.” 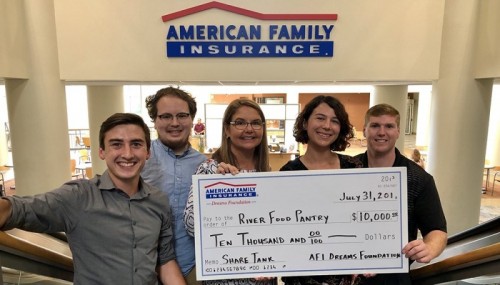 Following the presentations, the River Food Pantry was awarded a check for $10,000. The winning interns – Alexis Bernard (second from right in photo), Casey Olson (left) and AJ Sterlavage (right)Â – each received $500 to put towards college expenses.

The group proposed spending their $10,000 budget on purchasing two hydroponic growing systems. The systems could grow produce for the food bank year round and use less water and energy than traditional farming.

â€œTalking with the clients of the River Food Pantry and hearing how much food insecurity impacts their lives motivated us to go the extra mile to win,â€ said Bernard. â€œThe staff were so excited to talk with us and share ideas. They repeatedly told us how grateful they were to have worked with American Family on this concept.â€

All other participating Share Tank charities also received a $1,000 donation.

The Share Tank Intern Challenge provides experience and skill-building opportunities that interns can use in their future careers while at the same time increasing American Familyâ€™s philanthropic impact on the community.