The Dow Jones Industrial Average (DJINDICES:^DJI) was up just 0.01% at 12:40 p.m. EST Friday, despite news that the U.S. and China had agreed to phase one of a trade deal. The deal still needs to be finalized, and no date has been set for the final signing.

Two tech giants were able to produce some solid gains even as the Dow remained roughly unchanged. Shares of Microsoft (NASDAQ:MSFT) were up after the company revealed some details on its upcoming game console, and Apple (NASDAQ:AAPL) stock rose thanks to the positive trade war development.

Microsoft’s Xbox One and Sony‘s PlayStation 4, both launched in 2013, are on their way out. Both companies plan to launch new game consoles in 2020.

Late Thursday, Microsoft removed some of the mystery surrounding its upcoming game console. Officially named the Xbox Series X, the new Xbox will be available for the holiday season next year. A simple tower design will house some serious hardware. 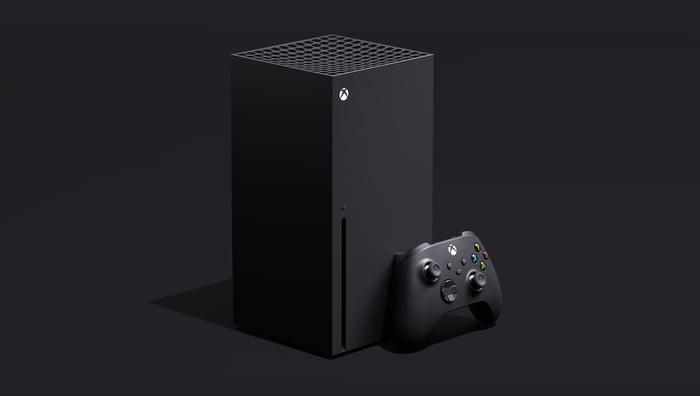 A custom processor based on AMD‘s Zen 2 and RDNA architectures will power the Series X, providing enough horsepower to support gaming at 60 frames per second at a 4K resolution. The console will use a solid-state drive for storage, which should drastically improve load times. Hardware-accelerated ray tracing, like that supported by some NVIDIA graphics cards, will also make an appearance.

Compared to the Xbox One X, which is the high-end version of the current-generation console, the Series X provides four times the processing power. The console will also be backward compatible, supporting games across four generations of Xbox consoles as well as Xbox One accessories.

Microsoft’s Xbox One was badly beaten by Sony’s PlayStation 4 in terms of unit sales. More than 104 million PS4 consoles have been sold worldwide, according to VGChartz, compared to just 45 million Xbox One consoles. While selling the most consoles is not the only measure of success, Microsoft will no doubt be aiming to do better this time around.

Shares of Microsoft were up 0.9% on the reveal. The stock is now up about 52% year to date.

Tariffs that were set to go into effect on Sunday on a wide range of electronic devices, including smartphones, have been cancelled as part of the first phase of a trade deal between the U.S. and China. Tariffs on some products will remain in place as is, while the tariff rate on other products will be cut.

Apple was heavily exposed to the prospect of 15% tariffs on gadgets coming from China. The company has been diversifying into services, but hardware sales and particularly iPhone sales remain the company’s core business.

In fiscal 2019, the iPhone generated $142.4 billion of revenue, about 55% of the company’s total. Services accounted for less than 18% of revenue, with the rest coming from other hardware like laptops, iPads, and wearables.

On top of iPhone sales directly accounting for the majority of Apple’s revenue, much of its services revenue ultimately hinges on iPhone sales or the iPhone install base. Revenue from warranties and the App Store, for example, is partly a function of how many iPhones Apple is selling. If tariffs had forced price increases and led to lower iPhone sales, other parts of Apple’s business likely would have suffered.

Shares of Apple were up 1.2% as investors cheered the tariff news. The stock is now up about 74% year to date.