Warning: Use of undefined constant REQUEST_URI - assumed 'REQUEST_URI' (this will throw an Error in a future version of PHP) in C:\xampp\htdocs\mbc1\wp-content\themes\jannah4\functions.php on line 73
 Apple ink provider in Japan makes mark with iPhone 11 Professional colours – jj

TOKYO — Apple may be the world’s most recognizable brand. Few consumers have ever heard of Seiko Advance. But when Apple CEO Tim Cook spent three days in Japan in early December, he made sure to visit the unsung company — and tweet about it.

In an interview, Cook told Nikkei that Seiko Advance is the “reason” Apple was able to release its top-of-the-line iPhone 11 Pro in a new color called Midnight Green.

Seiko Advance is an ink producer. Incorporated in 1950 as a paint supplier, it is an example of a long-established company that managed to adapt to a new age. It also shows how Japan’s technological backbone has endured even as some of its brightest business stars have faded. And its story tells us something about Cook, whose knack for managing procurement was one of the reasons Apple hired him in the first place.

“This was only made by high-quality control and craftsmanship,” Cook said early on a chilly December morning. He was standing in front of a metal tank full of green ink inside Seiko Advance’s factory in the countryside of Saitama Prefecture, near Tokyo.

Usually, producing green ink involves pollutants like halogens. The company, however, developed a cleaner way that offers high color accuracy and durability, said Yukinori Kabe, a sales manager. This appealed to the environmentally conscious Cook, who also praised Seiko Advance’s plans to switch to renewable solar and wind power in 2020.

Cook told Nikkei that Seiko Advance is “the best in the world” at what it does. He also tweeted this: 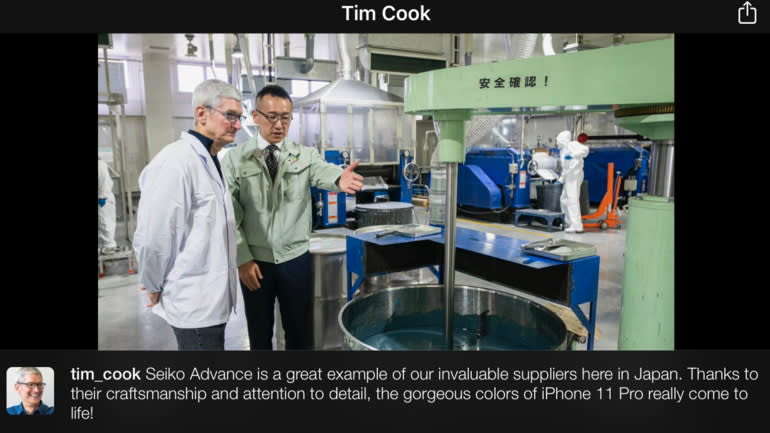 “Cook showed us his attitude to deal with any company with high technology,” said Kabe. “However small you are, Apple will be your customer if you have outstanding technology.”

Seiko Advance is a minnow compared with Apple. It has 160 employees and annual sales of several billion yen, or tens of millions of dollars. Apple reported $260.2 billion in sales for its latest fiscal year.

Their collaboration began in 2011 — a watershed year for Apple. Legendary co-founder Steve Jobs retired due to his battle with cancer, and died that October. Cook, who had joined Apple in 1998 after his supply chain management at computer maker Compaq caught Jobs’ eye, became permanent CEO.

That same year, a Seiko Advance sales representative received an email from the tech giant. Apple wanted the company and other ink makers to send representatives to the U.S. to explain their products.

Toshio Hiraguri, now Seiko Advance’s president, sent Kabe to make a pitch to Apple officials in charge of development. He was not aware of Cook back then; the two men met for the first time this December. One could say Seiko Advance had been preparing for decades. It had already produced inks for industrial products, including appliances and vehicles. The business expanded as Japan’s economy grew in the years after World War II.

In 1972, the company formed a technical alliance with a U.S. ink producer that boasted advanced screen printing technology, which allows for printing on a wide variety of materials. The partnership helped Seiko Advance enhance its own screen printing techniques — still the core of its expertise.

Even so, Kabe recalled that the visit to Apple revealed a “very different world.” Suppliers were expected to meet hundreds of criteria. “At that time,” he said, “we found that we couldn’t meet Apple’s high standards.”

After four years of trial and error, the company finally began supplying black ink for iPhones. Now Apple accounts for nearly 40% of its sales, while it also supplies major global smartphone competitors like Samsung Electronics and Huawei. Its inks are mainly used for high-end phones.

Inks for appliances, sign boards and vending machines account for the rest. Although the company declined to provide numbers, it said sales are growing, and that becoming an Apple supplier was a major boost.

Cook told Nikkei that Apple and Seiko Advance have worked together for years and “grown together.”

“Both parties enjoy working together, we push each other to innovate more,” he said.

Seiko Advance officials said that since Cook’s visit, they have been fielding calls from other potential customers. The challenge is to carry this momentum forward. “We maintain strict quality control,” said President Hiraguri, who succeeded his father in November.

Seiko Advance has a cleanroom in its factory. Hiraguri says it is the only ink company in the world that has one. This gives it a competitive edge, as controlling temperature and humidity keeps the ink under stable conditions and helps ensure consistent quality.

Apple’s Cook noted the cleanliness of the facility and the carefully controlled environment. 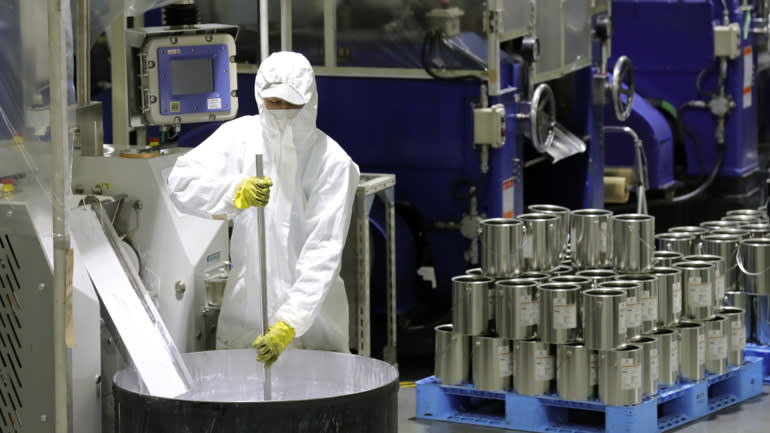 Seiko Advance has a cleanroom in its factory. (Photo by Ken Kobayashi)

Skilled workers are equally important. Seiko Advance has 30 experts who specialize in color compounds. They produce 150 colors per day and check them one by one, manually.

As the company nears its 70th anniversary, Hiraguri vowed to “keep providing good products as always.” But he also recognized the need to break new ground. “If we cannot produce better products, the value of a company will fade away,” he said.

Hiraguri stressed that Seiko Advance has never fallen into the red and that the company’s equity ratio is over 80%, which shows it does not rely on debt. But he sees a looming threat from emerging rivals in China, where he worked for a few years.

“Chinese companies are rapidly catching up,” Hiraguri said. “If we fall into price competition, we will be in a very tough position. We need to maintain quality to win.”

Cable TV will probably be cheaper to observe, understand how a lot rupees per channel has change into cheaper