new Delhi. Prime Minister Narendra Modi (Narendra Modi) has advised many times to reduce chemical and pesticide use from farmers. His government is continuously emphasizing on promoting organic farming. But most farmers do not have any concrete information about how organic farming will happen. Where will I get the certificate for it and what is its market? Where will you get the necessary things for such farming. The answer to these questions will now be found in one place. The government has developed an organic farming portal (https://www.jaivikkheti.in/) for the convenience of farmers, which you can take help of. According to Agriculture and Farmers Welfare Minister Narendra Singh Tomar, the central government has allocated Rs 1632 crore from 2015-16 to 2019-20 to promote traditional farming.

The government has created PKVY (Paramparagat Krishi Vikas Yojana) to promote organic farming. With which you will get 50 thousand rupees per hectare for natural farming.

To promote organic farming by the Central Government, the Government has formulated the Traditional Agricultural Development Scheme (PKVY). Under the PKVY (paramparagat krishi vikas yojana), assistance of 50 thousand rupees per hectare is being given for three years.

>> Under voluntary health management, private agencies are getting 33 percent financial assistance through NABARD at a cost limit of Rs 63 lakh per unit.

Total registration on the portal: There are 14.5 crore farmers in the country, but only 2,10,327 have registered on the organic farming portal. Apart from this, 7100 local groups, 73 input suppliers, 889 organic product buyers and 2123 products are registered. 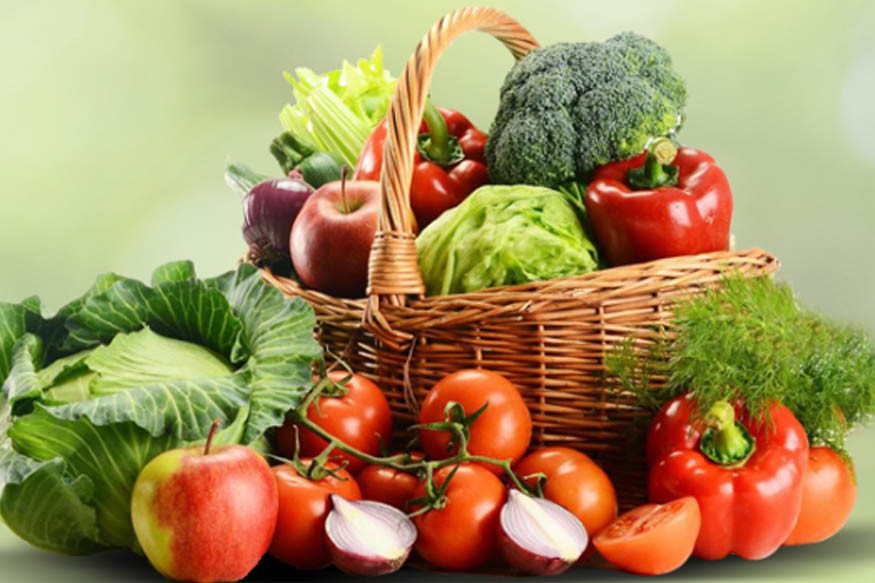 On the other hand, according to a report by the Union Ministry of Agriculture, at present 27.77 lakh hectares of organic farming is being done. Among these, Madhya Pradesh, Maharashtra, Rajasthan, Chhattisgarh, UP, Odisha, Karnataka, Jharkhand and Assam are doing well.

Organic farming and its market

>> According to the International Competence Center for Organic Agriculture (ICCOA), the market for organic products in India will reach US $ 1.50 billion by 2020.

>> According to the Central Import Export Control Board (APEDA-APEDA), India produced around 1.70 million metric tons of authentic organic produce in 2017-18. 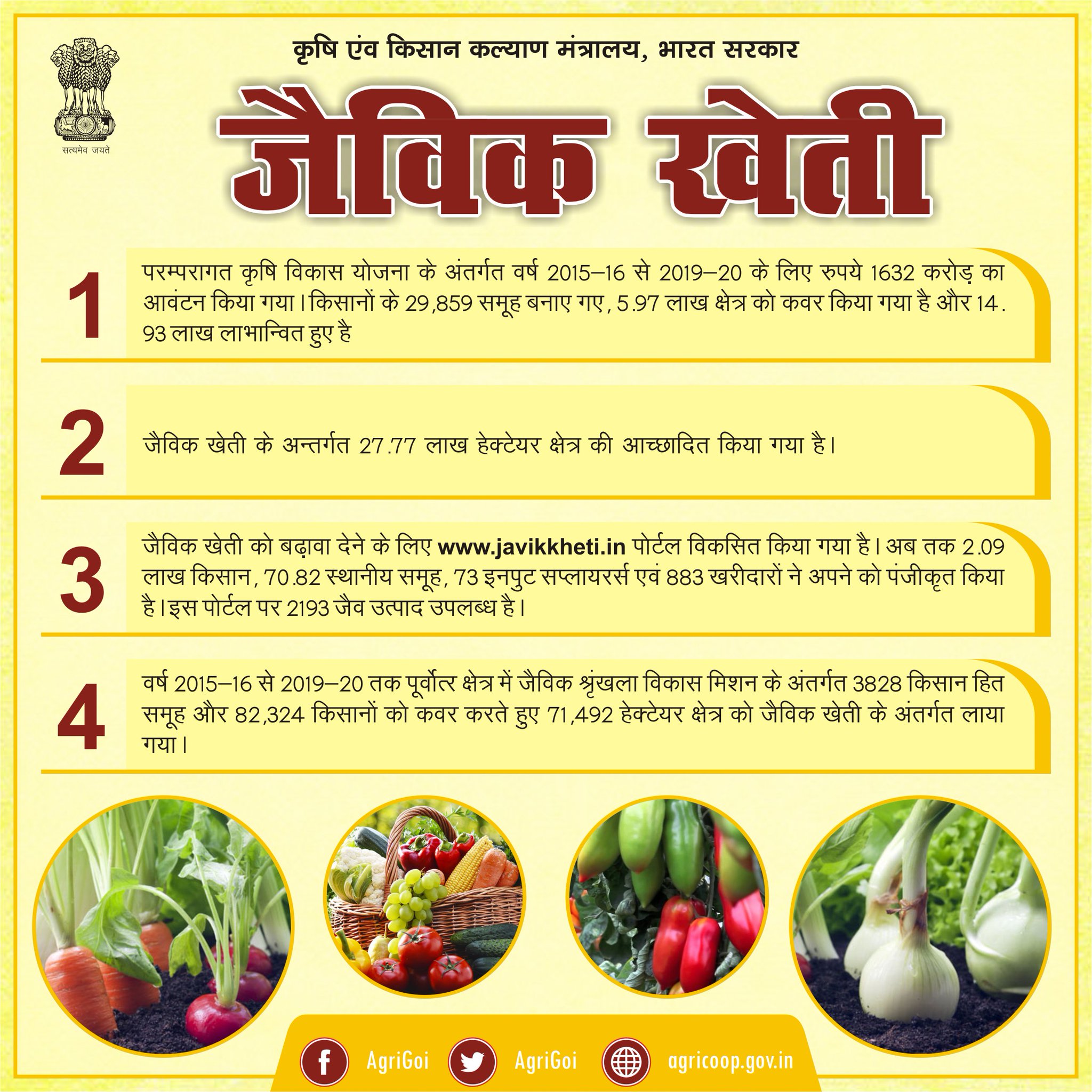 How to get a certificate of organic farming

Organic farming is a process of obtaining a certificate. One has to apply for this. Fees have to be paid. Before taking the certificate, organic material is necessary at every step including soil, manure, seeds, sowing, irrigation, pesticides, harvesting, packing and storage. To prove this, a record of the material used has to be kept. The authenticity of this record is checked. Only then the farm and produce get a certificate of being organic. Only after achieving this can a product be sold with the formal declaration of 'organic product'. Epida has recognized 19 agencies for sampling and analysis of organic food.

Evaluation of schemes and claim of benefits

The central government has conducted a study from the National Institute of Agricultural Actions Management to evaluate the benefits of its schemes being run to promote organic farming. According to its report, it has positive results. There is an immediate reduction in production cost from 10 to 20. Due to cost reduction, there is an increase in income by 20-50 percent. There is a lot of scope for growth in organic area in tribal, rain-fed, hilly and remote areas. This report has been mentioned in response to the question of an MP in the Lok Sabha.

Madhya Pradesh has the highest area of ​​organic farming. The agriculture department here has described the benefits of traditional farming.

>> The fertile capacity of the land increases. There is an increase in the irrigation interval. Reducing dependence on chemical fertilizer reduces costs. Productivity increases.

>> There is a reduction in pollution caused through soil, food and water in the ground. There is a decrease in diseases.

Sikkim declared itself a 100 percent agricultural state in January 2016. He removed chemical fertilizers and pesticides in a phased manner. According to APEDA, this small state in the northeast has converted its 76 thousand hectare agricultural land into an organic farming area.

This state has not got this title just like this. He formed the Sikkim State Biological Board. Built Sikkim Organic Mission. Built an organic farm school. Create 'Bio Village'. By the year 2006-2007, he stopped taking quota of scientific fertilizer from the central government. In return, he started giving organic manure to the farmers. The farmers were motivated to produce organic seeds and fertilizers.

The government may be appealing for organic farming, but farmers fear that if we stop using chemical fertilizers, the production will decrease. Some agricultural scientists also have this concern. On the other hand, the International Agricultural Development Fund (IFAD) has confirmed on the basis of studies conducted in India and China that the adoption of organic farming increases the income of farmers significantly. A certified organic product can be obtained at a good price in the market. The National Center of Organic Farming has claimed this in a report.

Saket Kushwaha, Professor of Agriculture Economics, says that in a country like India where 130 crore people live, organic farming is no less of a challenge. Because in such farming there is a great possibility of decreasing production. How will the need for food grains be fulfilled in this situation, while our holdings are decreasing. The second challenge is whether the market for organic farming will be found in the villages? Is there any arrangement to bring organic products from villages to cities?

According to Kushwaha, organic products are two to three times more expensive, so it can be sold only in places where purchase power is good. However, the truth is that the use of organic products will reduce medical expenses. The challenge for the farmer is that from where will he make so much organic manure. According to Kushwaha, the government can do this by encouraging every farmer to do 25 percent farming in the traditional way. When the farmers start benefiting from this, then they will gradually start increasing such farming. Even today some farmers prepare a product without fertilizer for themselves.

According to the CSE (Center for Science and Environment) State of India's Environment 2017 report, about 30 percent of the country's land is on the verge of being degraded or barren. This is a fundamental threat to agriculture. In Rajasthan, Delhi, Goa, Maharashtra, Jharkhand, Nagaland, Tripura and Himachal Pradesh, 40 to 70 percent of the land is going to be barren.

Actually, the use of urea to make the country self-sufficient in the agricultural sector started after the Green Revolution (1965–66). But agricultural sector experts say that the urea that we are using to increase production is gradually making our fields barren. 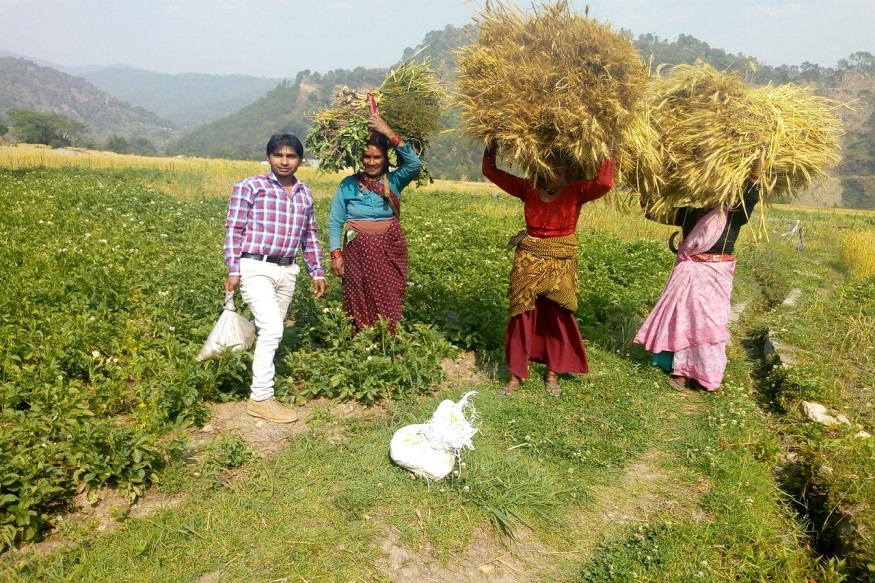 Also read: Now any business can start in 5 days, government is going to change

To understand its danger, India established the Society for Conservation of Nature (SCN) in the year 2004 to assess nitrogen. In addition to this, about one hundred hundred scientists published a report called Indian Nitrogen Assessment. In which its side effects have been described.

Therefore, the government is now appealing to the farmers to return to organic farming. Financial assistance is also being given to such cultivators. But the farmers are not ready for this at the moment. There is a concern among common farmers that if they reduce chemical fertilizer, will the production of grains and vegetables be able to remain the same?

Prof. Geography Head of the Department of Geography at Gorakhpur University. KN Singh says there are many challenges in doing organic farming. But we will eventually have to adopt it, because chemical fertilizers and pesticides are not only harming our health but are also a threat to the environment. Wheat-rice species which are in Green Revolution based farming are more dependent on water and fertilizer. Due to this, the risk of desertification is increasing.

Also read: Under this scheme, the government sends money to the bank account of farmers, know everything

Bidencare Is a Ineffective Pipe Dream

Venkaiah Naidu to inaugurate mukhyamantri krishi ashirwad yojana in ranchi immediately | Hundreds of thousands of farmers of this state will get an enormous reward immediately, as much as Rs 25,000 might be deposited within the account